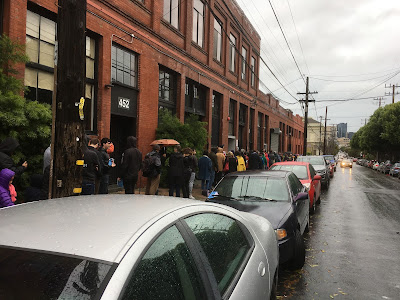 Hundreds of San Francisco Democrats lined up in the rain yesterday to vote for delegates from our local Assembly district to the state party convention. These elections take place every two years, selecting seven women and seven men. 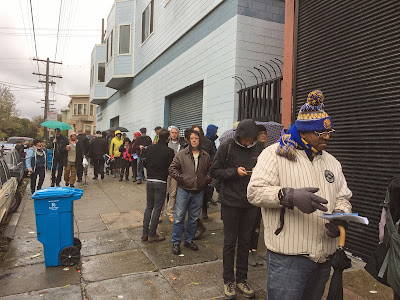 There's nothing new about these contests being contested. In a place where all elected officials are Democrats, politics simply switches from being constructed as struggle of Democrats against Republicans/conservatives to a contest between Democratic Party "moderates" and "progressives."

In San Francisco, the former refers to tech money moguls and real estate developers with their numerous associated hangers-on including our present mayor. This set has money to burn and consequently can gather a crowd. Progressives include lefties, Berniecrats, many rank and file union members, organized tenants, and the remnants of the social movements of the last 40 years. When the latter motley crew is organized, they usually have the numbers. The progressives lose when most people aren't paying attention. 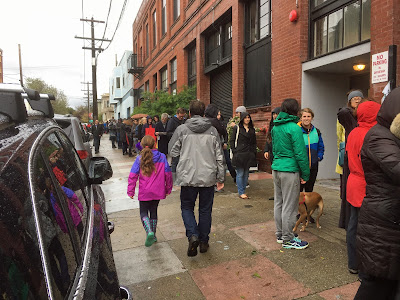 This year, Reform Democrats were paying attention. They did a terrific job of turning out a progressive crowd. The voting line stretched round the block. 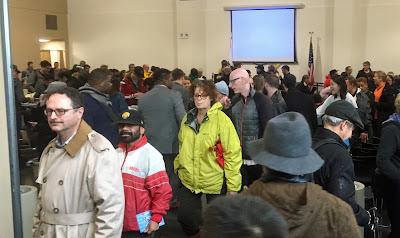 Once inside the union hall where the voting was happening, the line snaked around chairs and tables. We shambled from station to station quite cheerfully. For old timers among us, this was a chance to encounter friends and acquaintances from campaigns past (as well as to avoid a few political opponents). 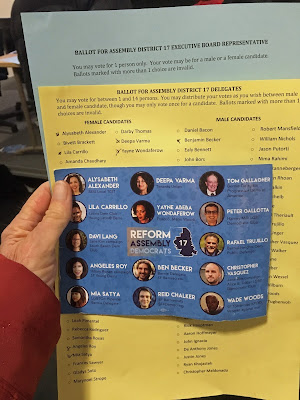 Finally we received our ballots, marked and deposited them in carefully guarded, marked, cardboard boxes.

Does this activity matter? In some ways, not much. The California Democratic Party is deeply anchored in generally progressive constituencies; whoever grabs the leadership and hence ends up writing resolutions and endorsing (or not) candidates and measures will at least make noises in a "progressive" direction. We don't have to worry about that.

But it is good to get the most committed people possible in official roles -- people who feel some accountability to a mass progressive base. I'm grateful for people who take up that cause; they make the electoral front a better arena. I don't think elections are the only front for progressive agitation -- far from it. But this is not something to be ignored either. It is certainly worth an odd, wet hour.
***
UPDATE: In the 17th Assembly District, the progressive "reform" slate won 8/14 delegates.

This is heartening news. It's all important.