Kaepernick broke the mold and found he was not alone 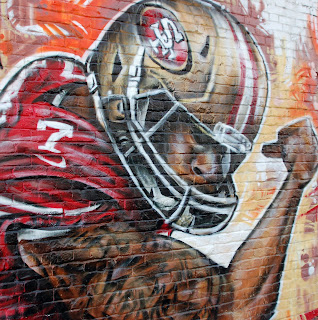 Yet another season of futility ended for the San Francisco 49er football gang yesterday. Our local gladiators suffer from a terrible ownership -- the York family -- and an inept management -- York family hacks. These diffuse their incompetence and short-sightedness across the organization. We can't blame the guys we see on the field when years of dumb and cheapskate decisions have robbed them of their chance to display their athletic potential.

But against all odds, the season was not quite lost because of quarterback Colin Kaepernick's decision to call out the country's racial sins by taking a knee during ritual performances of the national anthem. Even though 69 percent of NFL players are black, commentators mostly assumed he would merely alienate his fellows. Aren't these big, dangerous men taught early and often that they can only succeed in their much loved sport by tamping down their thoughts and feelings? At every level, coaches and decision makers strive to make automatons of brilliantly talented athletes -- "for the good of the team," of course.

Well, it seems not to have turned out that way for Kaepernick. He was often booed by hostile crowds. But his fellow 49ers apparently admired his stand. Even the team's authorities stood up for him. The players voted to give him

the Len Eshmont Award, their most prestigious honor, which is given to their most courageous and inspirational player.

...After Kaepernick’s national anthem stance became public in the preseason, he swayed skeptical teammates by passionately explaining in a players-only meeting that his decision was inspired by his disgust with racial inequality. In September, CEO Jed York matched Kaepernick’s $1 million pledge to community organizations, and head coach Chip Kelly strongly supported his quarterback.

“He’s shedding light on a situation that is heinous,” Kelly said of Kaepernick’s outspokenness on the killing of black men by police officers.

Who knows where any of these 49ers will land next season. The General Manager and Kelly have already been fired. But Kaepernick broke through the showy phony patriotism and machismo of the national spectator sport -- and found he was not so alone as might have been feared.
Posted by janinsanfran at 5:00 AM

Since sports are such a large part of many Americans' lives, the stand Kaepernick has taken is important.
Pushback needs to be constant and everywhere.

On a related note.

Hi Brandon. Theismann's reaction strikes me as the expected, conventional one from sports figures. What seemed amazing is how many athletes -- mostly but not only black -- did not react that way.