Many of the findings are unsurprising, if discouraging, to those of us hoping to stop police shootings of blacks and other people of color. Eighty-three percent of officers feel that their job is not well understood by the public, a belief that walls them off from the rest of us. Most white officers (92%) think enough has been done to ensure blacks have equal rights; black officers (29%) disagree. The white population outside law enforcement is more of a mixed bag; "only" 57% think that racial equality has arrived. The black public (12%) overwhelming says "no way." 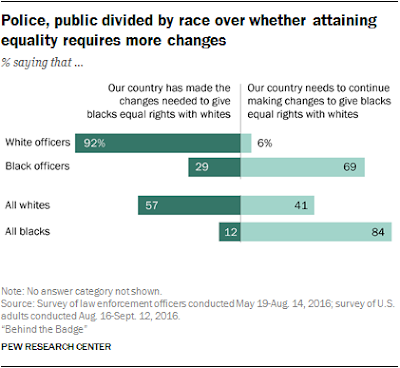 Some of the other findings Pew reports are less intuitively obvious. Here are some that struck me.
Posted by janinsanfran at 6:30 AM