Does U.S. democracy need our tired old Democratic and Republican parties? Part one.

Fareed Zakaria is Mr. Olympian Cosmopolitan Globalist on CNN. In an interview with Sean Illing, he's optimistic about liberal democracy around the world. That's not nothing, as his country of origin, India, is one of the places where he observes that the survival of democracy seems most precarious. But despite Trump's attempted insurrection on January 6 and continuing Big Lie, he's optimistic about the resilience of the U.S. system. Despite lapsing into some absurd false equivalence between the Dems and GOPers, he makes an interesting argument about our political parties:

The reason parties have been so central to the preservation of liberal democracy is that they channel public passions, public emotion, public anger, public joy, into programs and policies that are compatible with a liberal democratic framework. At their best, that’s what parties do. And parties act as gatekeepers. They rule out the most extreme fringes on both sides.

What has happened in America, ever since the onset of the primaries in the 1960s, is we have eviscerated the political parties and empowered all kinds of non-party actors — from the candidates themselves to the rich — through fundraising processes. And the effect of that has been that the parties have gotten hollowed out. ... [He concedes with a a little prompting that] this is particularly true of the Republican Party. So the party caves to Trump because they’re all worried about losing the next primary, about losing the funding that comes at those early stages, which all tends to come from the most passionate and the most committed. ... 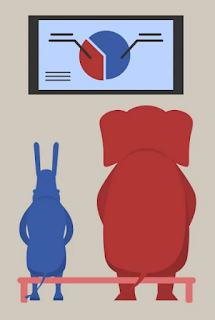 I think Zakaria's observation about how primaries function has a lot of truth to it -- but I think the degeneration of the parties includes something more which may be particularly visible here in California: much of politics is just about  keeping a big campaign industry afloat rather than about public opinions or public policies. The political universe supports a swarm of media manipulators, data operatives, pollsters, dirty tricksters, and aspiring strategic consultants, most of whom are only vaguely ideological, though most carry a nominal party identification. These people need jobs. At least some of the time, they necessarily work on campaigns which are more about a paycheck than a passion.

And, though slightly differently, the same goes for many politicians. They too adopt a party label. A few run for public office because they are willing to devote themselves to advancing particular policy objectives -- think Bernie Sanders or Elizabeth Warren. It's possible that just about all aspiring pols begin with big ideas they hope to implement. But most of them, successful or not, end up mediocre practitioners of the day to day business of government. They can't all be superstars. Whereupon, for offices holders as well the campaign industrial complex, their business becomes winning and retaining their (elected) jobs.

And more than the parties, it's these professional pols who raise the money that keeps the campaign industry going. Most are mediocre, but the survivors are good at fundraising. There's an axiom in philanthropic fundraising that donors -- including, even especially, foundations -- don't really give money to programs, they give to people, individuals who have established relationships and trust. This is also true of politicians. Politicians, whatever their programmatic aims, thrive on building relationships with donors.

So -- though our political parties stand, in a dilute way, for some public policies and some particular public passions, they simply aren't where the money that keeps the political business going is located. The money goes to individual pols. In fact, the parties are dependent on their superstars to fill their coffers. And their superstars can hold the party apparatus captive because they are the rainmakers for the whole enterprise. In some states and nationally, the party apparatus is a kind of facade for the individual rain makers.

No wonder a Trump can sweep in and take over one of our two big parties. There was never as much there there in the Republican Party as it imagined. Conservative ideology turned out to be mask, a weak signifier with not much content. This is particularly a vulnerability of a small tent enterprise, a party whose coalition is limited and shrinking.

But since Trump doesn't share cash -- or anything -- it could also kill off the Republican Party over time. The country has plenty of right wing nuts, small and large donors, but will they shell out for both the Party and the Donald? That's one of the questions the Trump-GOP engulfment poses.

Meanwhile, turning up fascist engagement in the base seems the only recourse left for mediocre politicians who have long since given up any ambition for anything but holding on to power.

Posted by janinsanfran at 10:43 AM