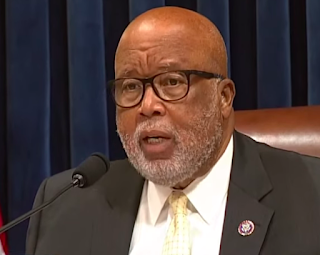 Congressman Bennie Thompson has represented Mississippi's Second Congressional District since 1993. That long tenure has qualified him to lead the House Committee on Homeland Security. And so now, he presides over the inquiry into the January 6 assault on the Capitol.

In most of the media -- appropriately -- the focus of reporting from yesterday has been on the dramatic testimony of the four officers who barely survived fighting off attacking right wing thugs.

But watching the proceedings, I was struck by part of Thompson's opening statement. He screened a montage of video from the insurrection, concluding with a shouted threat from one of the invading rioters. Then Thompson offered this:

He'll be back, he warns us. It's just chilling.

I thank God that our democracy—and our Republic—withstood the assault. But that man's warning reminds us that this threat hasn't gone away. It looms over our democracy like a dark cloud.

Some people are trying to deny what happened. To whitewash it. To turn the insurrectionists into martyrs. But the whole world saw the reality of what happened on January 6th. The hangman's gallows sitting out there on our National Mall. The flag of that first failed and disgraced rebellion against our union, being paraded through the Capitol. The hatred. The bigotry. The violence.

And all of it: for a vile, vile lie. Let's be clear. The rioters who tried to rob us of our democracy were propelled here by a lie. As Chairman of this Committee, I will not give that lie any fertile ground. ...

In this moment of national possibility, when we're moving beyond the pandemic and perhaps into some more active, constructive, government than in the last 40 years, I don't want to dwell on backlash, to fixate on our angry dead-enders who lash out against the multi-racial democracy we can glimpse distantly. Prosecutions for proven thuggery are grinding on. But realizing our national hope demands attention to this investigation, to uncovering the full story of the attempted coup against the election.