It's recall season in California ...

You've probably heard of the big one: on September 14, Gov. Gavin is on the ballot in a special election. We get to say "yes" or "no" to him -- and then, on a separate line, to vote on which of a collection of Republican mediocrities, has-beens, and crackpots we might like to replace him if we vote him out on the first question. Polls say we won't vote Newsom out -- that this a minority effort by GOPers trying to take advantage of post-pandemic voter irritability.

Pollster Mark Baldassare thinks it's not likely to work ... unless the majority which wants to see Newsom finish out his term stays home. Complaisant Democrats just aren't paying attention.

Presumably ballots for all registered voters should arrive in the mail, one of the reforms voted by the legislature in the wake of the well-run 2020 election. The Secretary of State's website says counties will begin mailing ballots on August 16.

Then there are the more local recalls. They are everywhere this year (though mostly not consolidated with the Newsom recall so their dates are not yet known). Election observer Ed Kilgore explains:

Why Recall Fever Is Sweeping California
While all the recalls cannot be dismissed (as many Democrats have tried to do) as GOP or right-wing stunts, there is no question that California’s very weak Republican Party has relied on this type of ballot “protest” more than its counterparts in states that aren’t as dark blue. ... How else can Republicans spend their time in such overwhelmingly pro-Democratic jurisdictions? 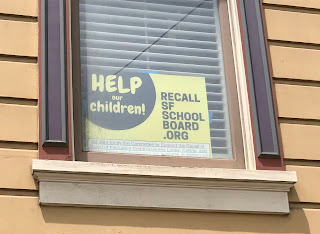 We've got a couple of doozy recalls here in San Francisco.

Plenty of parents and others have had it with our undistinguished school board which couldn't seem to focus on getting the kids back to learning as the pandemic waned. Only three of the current members have served long enough to be eligible for recall (the others were first elected last fall). It doesn't look good for the three.

Recall promoters need 50,000 signatures by Sept. 7. They've gotten about half so far at farmer's markets. I'd bet they make it; there's a lot of passion behind this one.

I'll probably vote against this recall; I can't believe more turmoil and likely more incompetent management will help. But I'm disgusted enough to feel the impulse to vote this crew out. 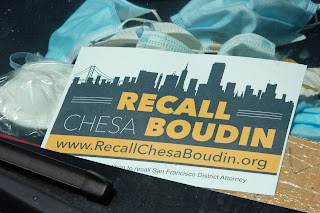 On the other hand, I'm disgusted by two efforts to recall our newish (elected 2019) District Attorney Chesa Boudin. Neither our few local GOPers nor a goodly number of our wealthy "moderate" Democrats like his thankless effort to put more justice back in the justice system, especially for low income San Franciscans. He's refused to overcharge or hold people in jail for low level offenses. He's charged four different cops in different episodes with using excessive force and he promises more to come if warranted.

At 48 Hills, local progressive journalist Tim Redmond attempted to unravel who's funding this one. He found some local realtors, some tech bros, some conduits for national police associations -- and a bunch of national Republican millionaire donors. Redmond is dismissive:

Whatever you hear or see about the Boudin recall signature effort, and if it does qualify, the ads that you are going to see, are part of a national right-wing effort to undermine progressive criminal justice reform. Boudin won the election on a platform of doing exactly what he has done; there’s no scandal here.

The backers are also part of a local movement backed by Big Tech and real estate that is trying to control the direction of local politics – these days, with little success.

Many of the people involved were strong supporters of Boudin’s opponents.

Like Trump supporters, they don’t seem to want to accept the outcome of an election.

If this one gets to the ballot -- and with enough money to pay signature gatherers they probably can make it, I know I'm voting to retain Chesa Boudin.