War is too important to be left to Presidents 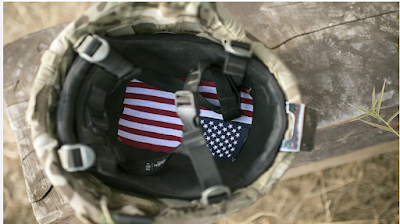 Of course we aren't really done with the forever wars, because we're still living with the distortions they've midwifed within our institutions on the homefront.

Failed wars have been the impetus for efforts to refine the Constitutional framework within which (more or less) we make war. The 1973 War Powers Act which attempted to set some limits on presidential power to lead the country off to fight was a product of the Vietnam debacle (and Richard Nixon's failed presidency.) It's not been much of a success. Presidents of both parties don't like being constrained by Congress.

An interesting coalition of bi-partisan Senators is trying once again to return war-making authority to Congress. Constitutional history is on their side. Bernie Sanders, our exemplary Vermont democratic socialist, has teamed up with Mike Lee, a Utah libertarian with a Mormon's appreciation of the Constitution, and Chris Murphy, a smart Connecticut centrist Democrat.

Their project is ambitious.

The measure seeks to replace the War Powers Act of 1973 with a series of better-defined, and arguably more stringent directives to the current and future administrations about when to approach Congress for permission to conduct military operations. It would define “hostilities” as any operation requiring the use of force, remotely or directly — superseding the unofficial custom of administrations interpreting the law as applying only when there are troops on the ground. It also would shorten the time that presidents have to engage in those hostilities from 60 to 20 days and automatically terminate funding for an operation if a president fails to secure congressional support for the venture by that deadline.

The legislation seeks to impose similar authority over how administrations conclude arms sales and declare national emergencies; it would require the president to secure affirmative votes from Congress before finalizing such sales, instead of leaving it to lawmakers to come up with veto-proof majorities on tight timetables to block them.

... Typically, it is difficult for Congress to come up with veto-proof majorities to block presidential action. That was also the case in 2019, when Trump declared a national emergency along the U.S.-Mexico border, to enable him to divert billions of military construction funds by fiat to build a wall. The new bill from Murphy, Lee and Sanders would curtail any national emergency that Congress does not approve within 30 days, and it would limit Congress’s authorizations of such emergencies to one year at a time, with a total limit of five years.

We are very unlikely to see anything so restrictive pass. Presidents like to take unfettered action; they argue, with justification, that Congress can be both timid (glad to pass the buck) and mindlessly bellicose (when that's the popular mood.) But the war making power was originally intended to be placed in Congress, as the branch of government closest to the people's sentiments. And for all the changes of the last 200 years, Congress is still the arena most malleable in response to popular action.

So cheers for these Senators -- get what you can from the opportunity created by our latest failed wars.

Posted by janinsanfran at 11:32 AM

Email ThisBlogThis!Share to TwitterShare to FacebookShare to Pinterest
Labels: rule of law, war