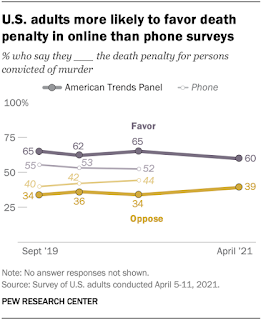 Pew Center pollsters report a finding that interests me quite a lot. Respondents consistently report more support for the death penalty when polled online than they do when answering questions from a live interviewer on the phone. The difference is quite significant.

... The experience of taking surveys is different when respondents are speaking with a live interviewer, as opposed to answering a question online. In addition, survey questions that ask about sensitive or controversial topics – and views of the death penalty may be one such topic – may be more likely to elicit different responses across modes, perhaps attributable to social desirability bias. When mode differences stem from social desirability, data collected via self-administered modes (e.g., online) is typically more accurate than data collected by an interviewer (e.g., by phone), all else being equal.

That is, apparently decades of campaigning against unequal justice and racial bias in sentencing, not to mention ethically motivated opposition to execution by most religious organizations, have made it slightly taboo to announce you want the state to kill offenders. Yet as we know, a lot of people still do feel there is no justice without some state killings.

The gap between support for executions in online studies and live interviews was wider (more toward the pro-death penalty position) among Black and Hispanic respondents than among whites. College grads of all races were also more likely to express support online than in live interviews.

It seems notable to me that the trend of support for the death penalty looks as if it is steadily falling if you look primarily at the gray live-interview lines -- not so much so if you focus on the online numbers.

Having worked on a failed campaign to end the death penalty in California in 2012 which was explicitly, and very carefully, designed to take advantage of trends we saw in the polling, were we at least in part hoodwinked by over-optimistic research?

An additional Pew poll finds that opposition to the death penalty is stronger among atheists and agnostics than among any religious group. Religious leaders may decry executions, but the ranks of their followers are ambivalent when not enthusiastic.