After 15 long months closed, it looks as if there's action at the Mission Branch of the San Francisco Public Library. That doesn't mean our local outpost is opening up -- it means that the optimistic remodeling plan projected two years ago is getting underway.

Architects have a tough job. The building is an elegant turn of the 20th century edifice, one of 2,509 built between 1883 and 1929 with funds donated by the philanthropic steel magnate Andrew Carnegie. I think it is fair to say that he hoped by offering access to books in neo-classical environments he would reinforce the industry of the immigrant masses who were his workforce. Whatever his motivation, all over the country libraries still use his buildings -- and struggle to adapt these physical structures to modern requirements. 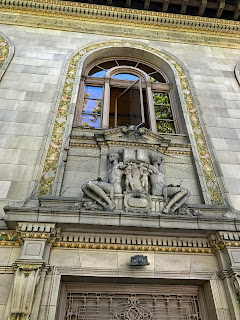 This imposing, closed off, former main entrance conveys a sense of where architects have to start.

Before the pandemic, neighborhood surveys and a city planning process had determined that what the space needs is better facilities for children's story hours and better wired study space for low income students. But how the interior might reflect the neighborhood was still up in the air.

Then the other day this appeared on the unused doors: 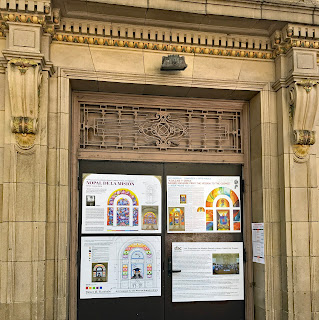 The posters show three designs by local muralists proposed for one sealed-off window that looms over the main reading room. The Library Commission is offering all interested people an opportunity to comment on the proposed designs, deadline August 5. Go ahead, take a look.

Mission Local has much more, including artist biographies.

Which do I prefer? Not sure at all. Any would be a great addition to this strange, serviceable, much-loved architectural oddity. I think I lean toward this antic offering from Javier G. Rocabado. 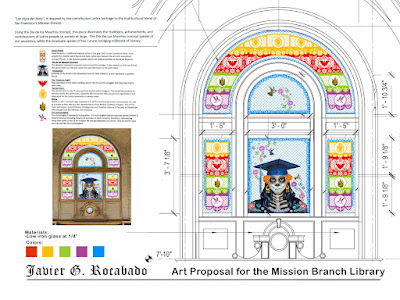 Los Hijos del Maiz is dedicated to René Yañez, the late curator of SOMArts.  Using the Día de los Muertos concept, this piece illustrates the traditions, achievements, and contributions of Latinx people to the Mission District and society at large.  The Día de los Muertos concept speaks of our ancestors, while the Graduate speaks of the Future, bridging millennia of history.

But your mileage may vary. This a participatory project.

Posted by janinsanfran at 6:23 PM