Let's come at the question of whether we need political parties through another point of view.

Valentina Lares is a Venezuelan journalist and managing editor of Armando.info, an investigative journalism site. Somewhat to her own amazement, she mourns what has become of formerly potent political parties all over the world.

The first time I voted, a little more than 20 years ago, my options were straightforward: I could vote for a conservative politician put forward by a conservative party, or I could vote for a liberal candidate put forward by a liberal party. I didn’t much like either of them, but each was proposing a recognizable path for my country, Venezuela, to follow.

... Let’s be clear: It’s not that anyone really liked those old parties, with their clubbiness and their corruption. It’s just that we knew who they were. We knew where their ideas came from, we knew from what clay their ideas had been molded and whose interests they championed. Your identity folded neatly into your vote: If you were a union member, you voted for the Social Democrats; if you went to church, you voted for the Christian Democrats. Simple.

But all over the world, she sees splintering and allegiance to particular individual persons replacing those old party identities.

... The multiplication of parties has been accompanied by widespread doctrinal hollowing. In Latin America, for instance, we’re no longer liberals or conservatives, radicals or centrists. We are chavistas, uribistas, correístas, bolsonaristas, fujimoristas, kirchneristas. What ideas do they represent, what vision do they champion beyond support for a given person? It’s often hard to tell.

Even the oldest, most established democracies are not immune from all this: in the U.S. the GOP has morphed into a simple vehicle for Trumpism. ... Where parties can’t serve as a locus for traditional, big-tent identities, politics dissolves into a squabble between personalities.

Her prescription for this political chaos:

The challenge is to leave room for new political groupings, while avoiding a free-for-all. To put forward a comprehensive vision of a better future, alongside a reasonable way to make it a reality. We have a right to know where they propose to take our countries, and how. It’s time we demand that those who aspire to lead us take that responsibility seriously.

For all the anxiety of the current moment -- and there is plenty to worry about with so many GOPers applauding the January 6 coup attempt -- I'm watching an emerging generation of people using the Democratic Party label fill that label with as much plausible substance as it's had in my life time. Yes, there's the Biden administration's ambitious climate and social welfare initiatives and that's encouraging.  But, more, there are also the likes of India Walton, the socialist nurse who won the Democratic nomination for mayor of Buffalo. She doesn't love the Democratic Party, but she might redeem it.

If Walton is the future of the Democrats, I agree with Michelle Goldberg, we've got a chance: 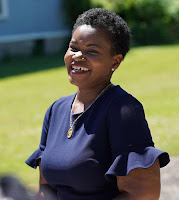 “The challenge of the left is that we use our jargony activist language and don’t take time to fully explain what we mean to those who may not be as ‘woke’ as we are,” [Walton] told me.

... Instead of “defund,” she said, “we say we’re going to reallocate funds. We’re going to fully fund community centers. We’re going to make the investments that naturally reduce crime, such as investments in education, infrastructure, living-wage jobs. Nothing stops crime better than a person who’s gainfully employed. If you have to go to work, you don’t have time to be out in the streets with all these shenanigans.”

... In some ways, Walton epitomizes the winning formula for left-wing candidates. Today’s left is basically a coalition between well-educated liberal professionals and working-class people of color. Often those best able to unite these groups are people of color with radical ideals and working-class ties. Look at the leftists who’ve been elected to Congress in recent years: Alexandria Ocasio-Cortez was a bartender. Jamaal Bowman was a principal in the Bronx. Cori Bush, like Walton, was a nurse.

An old line Democrat, the incumbent Buffalo mayor, is trying to stop Walton in November through a write-in campaign. Her kind of Democrat wasn't supposed to exist. We'll see if money and inertia can stop her.

Folks like Walton make a Democratic Party I can relate to, more than at any time in my life. I'm surprised, but that's a happy thought in a scary landscape.

Part one of this series on political parties here.