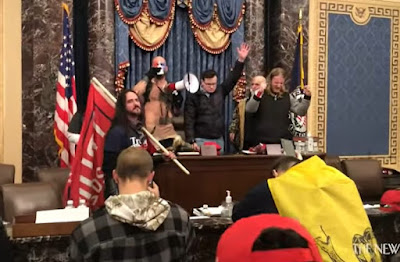 With the House of Representative inquiry into the January 6 assault on the U.S. capitol set to begin tomorrow, it would be worth listening again to the observations of the judge who sentenced the first of some 500+ persons charged for actions that day.

U.S. District Judge Randolph Moss explained to Paul Hodgkins why he was being given an 8 month sentence for pleading to one felony count of obstructing an official proceeding:

Hodgkins was one of a small handful of Capitol rioters who made it into the Senate chamber during the attack, appearing with a Trump flag inside the chamber not long after lawmakers and Vice President Mike Pence had fled the room.

“The symbolism of that act is unmistakable,” Moss said. “He was staking a claim on the floor of the United States Senate not with an American flag, but with a flag declaring his loyalty to a single individual over the nation.”

“In that act, he captured the theft of democracy that we all witnessed that day,” the judge added.

... “The attack on the Capitol on Jan. 6, in which Mr. Hodgkins actively participated, at the very least tarnished that happy history,” Moss said.

... "It makes us question whether our democracy is less secure than what we previously believed just seven months ago.”

Great to see that Reps. Jamie Raskin and Adam Schiff are on the special investigatory committee. They proved their ability to grasp the enormity of Trumpian offenses during the two impeachment proceedings. There's no doubt they'll be obstructed by GOPers, but we need them to expose every fact about the insurrection they can dig out.

Posted by janinsanfran at 1:00 PM

It's a shame he got ONLY 8 months.