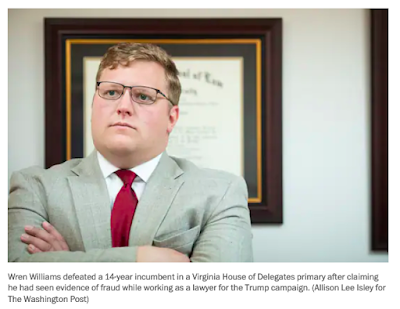 The Washington Post has furnished my iconic mental image of a young Republican here: white, male, self-satisfied, smug, aggressively impervious to contradiction or perhaps even information -- at least that's the visual impression he makes on me. All those judgments could be wrong, though the article which explains this guy jumped into lawyering for Trump's Big Lie, suggests perhaps not. I see a repulsive self-presentation, of which I suspect he's proud.

I bring this up, because I read with interest another Post article describing an American Enterprise Institute (AEI)  study about who we tend to include in our friendship circles:

The simplest explanation of this finding is the easiest to understand. There are simply more people who lean Democratic (53 percent of us) than lean Republican. And we tend to live in proximity to each other in cities and dense suburbs, so it's more common for us to be surrounded by our own kind.

That goes double for historically disfavored groups who look first to their own kind for self-protection: Black people aren't going to know a lot of Republicans, including Black ones, though there are some. Just not a lot.

Something similar goes for queer people: we may not be thrilled with Democrats, but we sure aren't about to hang with people who think we belong back in the closet. This is certainly why any right leaning people fell out of my friendship circle decades ago.

... Liberal women were the most likely to cut ties: A third said they stopped being friends with someone because of their politics.

It's easy to overlook, but progressive women, even white ones, can feel vitally endangered by Republican patriarchal postures. The current Supreme Court looks to make Republican rule even more salient, and repulsive, for many women.

Meanwhile, the New York Times has published a fascinating conversation with Rep. Adam Kinzinger, a Republican congressman who has bucked his party, voting for impeachment and a serious investigation of the January 6 insurrection. Take the time to read it; it restores some faith in the notion of political thoughtfulness. I can't imagine voting for the guy (he's a conservative) but I can listen to him. He has a  suggestion for how to overcome uncomfortable political polarization:

If you’re on the right and don’t have a friend from the left, go make one. And if you’re on the left and don’t have a friend from the right, go make one. Talk about your fears. Everybody’s fear is the same: There will be no place for me in this country. If a liberal hears a conservative say, “No, we do want you here,” and a conservative hears a liberal say, “You may be a crazy conservative, but I still want you here” — that’s how you start to build trust.

... internal division is actually the thing that I fear the most right now. I jokingly say — but I’m not really joking — if China nuked California, a lot of Republicans would be like, “Good, we can win.” And if they nuked Texas, there might be a lot on the left saying, “Good, we can win.” I say that facetiously, but that’s how it feels at moments, and that’s a big concern.

I plead guilty to being willing to do without Texas -- except I have a lot of Democratic friends there. (Let's win it, instead of nuking it!) I don't think I can say to a crazy conservative who wants to disappear me, that I want him around. I think I can still say "I want you to be free to yell your crap." though I don't feel any obligation to listen. And no obligation at all to allow him to use any privilege he has to step on anyone.

My wise friend, Scot Nakagawa, a longtime organizer against the right in the Pacific Northwest, had a suggestion for those of us who want to combat the country's popular authoritarian lurch. I think he's onto something:

[Among] ways to gain greater leverage [there is] one that just about everyone can do: it to join something. Join a church, a neighborhood group, club, professional association, or whatever else moves you. Join real life and not just virtual groups because that’s where the real leverage lies, and join things you fit into well, where you are a native, so to speak, so you can experience safety and exercise influence.

If we can, we mustn't silo. We need to be inside "normie" institutions when we can survive them.That's part of the way forward.

Posted by janinsanfran at 12:00 PM

I'm one who thinks it weird, silly, and counterproductive to surround myself with people who think just as I do. I go out of my way to consult with someone/those who think differently. It's surprising how frequently my planning improves with their input.

I've lived most of my progressive life in deeply red states. My closest friend (since 1963) and my husband (since 1958) numbered among those against whom I regularly voted. My closest friend admits that the former president was deeply flawed; but, because she came from a deeply Republican family still cannot bring herself to vote for a non-Republican. Suddenly last summer, my husband became an Independent, having become thoroughly disgusted with the then-president and his administration. For decades my husband espoused (along with most of his co-workers & social friends) the virtues of each person's being responsible for him/herself and of the government staying out of it. Now...he's the first to tell me how lucky we've been that we've done so well in life - and - he's begun to support charitable causes and government policies that help the less fortunate.

I'm not sure what lesson(s) I've learned in my 86 years; but, one idea I deeply hold - that we must talk to and mix with one another. I propose that the seating and office assignments within governmental bodies (including US Congress) be made with the purpose of intermixing people nearly randomly when it comes to party. No Republican should be surrounded by other Republicans and no Democrat should be surrounded by other Democrats. (There aren't enough Independents or other affiliates to worry about at the moment.)