Yesterday morning, in an article about the Biden administration Justice Department's clean up of the agency post-Trump, Donald Ayer, Norman Eisen and E. Danya Perry, establishment legal eagles all, included a throwaway line that caught my eye:

Attorney General Garland has taken forceful action in a number of areas posing the greatest threats to our system of government and law. ... developing and moving forward with a comprehensive program to address and combat domestic terrorism ...

The Trump era showed that professional legal ethics can act as some barrier against the worst corruptions and perversions of the legal system. Even at its most minimal level, attorney caution about breaking the rules slowed our tinpot dictator down a bit. And some lawyers quit rather than be a party to legal travesties like withdrawing charges against a guilty-by-his-own-admission Michael Flynn.

And I certainly want to see the DOJ find legal ways to disrupt and prosecute the bumper crop of white nationalists and neo-Nazis that have become foot soldiers for Trump's Republican Party. Like all of us, they must have a right to their opinions, but these gun nuts and thugs demonstrated how immediately dangerous to other people they are on January 6. Their violence that day was in service of a greater crime, preventing certifying of a lawful election. The law has to find a way to hold them accountable. 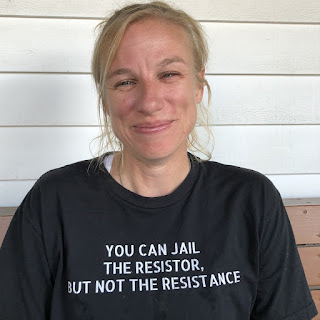 Another bit of news that crossed my screen reminded me that asking judges to judge whether someone is a domestic terrorist is a perilous delegation of power.

A federal judge in Des Moines, Iowa, has recently sentenced Jessica Reznicek to eight years in prison. Reznicek is an unusually brave and determined opponent of the Dakota Access Pipeline which carries crude oil under Iowa and the Mississippi River; detractors insist line's owners, Energy Transfer LLC, are endangering the water supply for the whole region. Along with Ruby Montoya, Reznicek carried out a campaign of sabotage against the pipeline, destroying construction equipment and pipe line facilities. The women didn't stop the project -- but the damage they caused cost the company more than $6 million.

These are non-violent resistors of the Catholic Worker-inspired sort, spiritually-motivated pacifists. They acted in the belief that they were impeding evil. No human being was injured in their campaign. When ready, they announced their guilt and stood by to be arrested. They proclaimed their purposes: they aim for more human flourishing, not less.  (And there weren't any accidents marring the non-violent character of their actions.) There's a long, sweet account of their moral and intellectual evolution in this article from Rolling Stone.

But to a federal judge, Reznicek is a terrorist, which meant she deserved a longer sentence.

Jessica’s attorney Bill Quigley [stated], “Unfortunately, actions to protect our human right to water were found to be less important than the profit and property of corporations which are destroying our lands and waters. For a country which was founded by the rebellion of the Boston Tea Party this is extremely disappointing. But the community of resistance will no doubt carry on. And history will judge if Jessica Reznicek is a criminal or a prophet. Many of us are betting she’s a prophet.”

I get that people who are convinced that their moral rectitude gives them a duty to disrupt the good order of our complaisance are dangerous. But perhaps they are also essential to the rest of us, to remind us to check our own values.

They are not, to my mind, properly labelled "terrorists."

Posted by janinsanfran at 8:36 AM

There are two ways to look at critical infrastructure.

There is how you portray it above...As a symbol of corporate greed and ecological damage. Which is true, but also wrong.

It is also important to understand that this infrastructure supports our society and our quality of life. You and I drive vehicles and fly to destinations across the globe, this would be impossible without petroleum products such as supplied by pipelines. Our entire economy depends on petroleum, our employment, food, health, literally everything. Pipelines suck as a way to move oil from place to place, but every other way sucks more.

You may argue that this dependency should not be the case, but it is the case. Moving away from a carbon based economy will be slow and difficult.

In the meantime attacking the infrastructure our society depends on is and should be a crime. The sentence Reznicek received is correct, she consciously performed the acts she admitted to, she understood the consequences.

I think she went about it the wrong way. If you wish to change our dependency on oil and ease the damage it does to our world you need to advocate the switch to new energy sources. Push legislation to aid or even force the transition, do the work of designing and building new energy solutions, make the change happen.