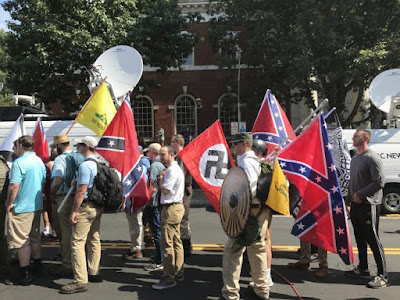 My smart friend Scot Nakagawa makes some points that, in our revulsion from white nationalist posturing, it would be easy to skip over. The attack on the teaching of "critical race theory" -- really on any sort of mention of racism in the schools which makes some white parents uneasy -- has a more strategic purpose than just stoking cultural fears and resentments. [My emphasis in what follows.]

First, here’s what’s most obvious to me. The Republican Party is using the attack on CRT to make the argument that racist expression is a form of liberty, and those who are trying to eradicate racism are doing so to eradicate liberty, making us unAmerican.

... Second, I think the attack on CRT is a means by which the GOP is adapting their traditional base to the new, overt white nationalist wing of the Party. So we’re witnessing something very dangerous. GOP is facilitating a merger between the far-right and the near right and that, I probably don’t need to tell you, is a very bad development.

... Thirdly, I think we need to view the attack on CRT in the context of fascistic politics. In that context, it seems pretty apparent that the anti-CRT push is an attack on truth; as much a big lie as the idea that the election was stolen.

Reality is the enemy of fascistic politics because, in reality, autocrats aren’t really concerned about the interests of their base. By appealing to white nationalism in order to reach for power, the aspiring autocrats of the GOP have abandoned realpolitik. Or, put more simply, they’ve opted to build a popular front for oligarchy based on what amounts to political road rage, where the best case scenario appears to be that their pissed off drivers will abandon practical considerations of life in order to tailgate perceived enemies and drive them off the road. ...

Those doofuses with the Confederate and Nazi flags are just suckers. Their racism makes them marks for authoritarian oligarchs.

I think progressive white people's political work needs to include impeding Republicans' sought-after merger of the far right and the near right. As Scot has said elsewhere (and I've highlighted), we need when possible to participate in mainstream institutions within which we can keep contact with folks who are not altogether corrupted by the fascists.

Not my idea of fun, but there it is.

Posted by janinsanfran at 3:24 PM