Who gets to vote is still up for grabs

The first time I began to understand a bit about how Native Americans' right to vote is frequently denied was in 2004. Not that what I saw that year was anything new ... but it bears remembering.

The Democratic-adjacent political consultancy we were working with in Albuquerque, New Mexico had assigned an eager young man several months before the November presidential election to try to increase the vote coming out of the state's nineteen recognized Pueblos. These tribal entities were deeply rural and isolated, mostly very poor without money jobs except perhaps at a dingy casino, and organized under Native governments. Nowadays, the state of New Mexico advertises them to tourists. Then the Pueblos were just pockets of poverty to be romanticized by whites as historic artifacts and kept out of sight.

Our organizer went to work vigorously. He drove hundreds of dusty miles on dirt roads, held numerous meetings with elders and tribal authorities, and finally persuaded several hundred eligible people to sign up to vote. Then he arranged for their registration forms to be delivered to the appropriate county governments in which their particular pueblos were located.

As Election Day approached, nobody heard anything. The new registrants were not contacted. Finally Democratic Party election lawyers made some calls and were assured that all was well.

On Election Day, our organizer returned to some of the hamlets where he'd worked so hard in order to drive voters to the polls. But his passengers were turned away; there was no record of their registrations. The election lawyers eventually determined that NONE of these 300 or so citizens were entered on the rolls. So they could not vote.

And just to rub it in -- most of the counties where the Pueblos are located were run by white and Hispanic Democrats. It seems that out there in the countryside what disqualified a voter was being a tribal citizen ... 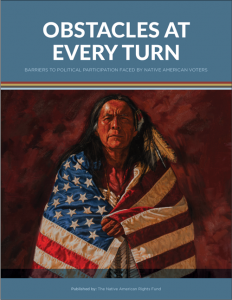 This June, the Native American Voting Rights Coalition issued a report titled: Obstacles at Every Turn.

Not nearly enough has changed since 2004 for Native voters: too many election rules seem designed to make voting very difficult. Potential Native voters are disqualified by not having addresses recognized by the post office, by election offices and polling places which are only open limited hours, by limited numbers of polling places, and by having to take costly drives over long distances on unpaved roads in order to cast a ballot.

And then last week, the Supreme Court approved an Arizona law which strictly limits who can carry a voter's completed ballot to their polling place. This is aimed straight at impeding voting by tribal citizens living far off the beaten path. The highest court has made it abundantly clear that it will not protect against partisan, often racist, restrictions on voting.

National legislation protecting voting rights would seem the obvious remedy -- but it seems we may not get this because of the unwillingness of a few Democrats in the U.S. Senate to use their power to make it happen.

Voting rights for Native Americans still depend on the determination of the people to claim the vote.

Posted by janinsanfran at 9:28 AM

So who's paying off those two politicians?