U.S. religious landscape 2021: among the insurrectionists 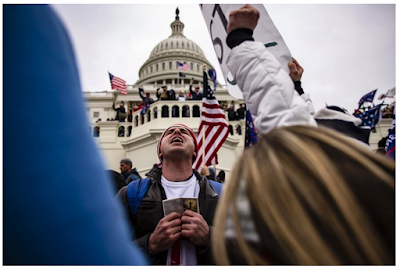 Michelle Boorstein, the experienced religion reporter of the Washington Post, has surveyed sociologists of religion about what can be discerned from the peculiar beliefs and passions of the some 500 charged participants in the January 6 attack on Congress. These people are into some pretty wacky stuff -- and some very American religiosity.

For many, their religious beliefs were not tied to any specific church or denomination — leaders of major denominations and megachurches, and even President Donald Trump’s faith advisers, were absent that day. For such people, their faith is individualistic, largely free of structures, rules or the approval of clergy. ...

... part of the mix, say experts on American religion, is the fact that the country is in a period when institutional religion is breaking apart, becoming more individualized and more disconnected from denominations, theological credentials and oversight. That has created room for what Yale University sociologist Phil Gorski calls a religious “melee, a free for all.”

...  Even before Jan. 6, some sociologists said the fastest-growing group of American Christians are those associated with independent “prophets” who largely operate outside denominationalism.

Less than half of Americans told Gallup in March that they belonged to a congregation, the first time that has happened since Gallup started asking in the 1930s.

... what researchers studying Jan. 6 find remarkable are the leaderless, idiosyncratic expressions of religion that day. Among them are those of [Pauline] Bauer, who wrote to a judge last month that she’s a “free living soul” and an “ambassador of Christ,” and of Jake Chansley, the “QAnon Shaman” who prayed to Christ at a dais in the Senate and calls himself a “multidimensional being.” ..

... “You have people who have these idiosyncratic relationships with God — you’re sort of taking off on your own,” [Paul] Froese [a sociologist at Baylor University] told The Post. “You can say, ‘God told me whatever.’”

... Such individuals “tend to have a thin knowledge and understanding of their religion,” [Robert] Pape, [a University of Chicago political scientist also known for studying suicide bombers] said. “Recruits tend to be making individual decisions about the ideologies they want to follow and even what it means. It’s very much at the level of the individual.”

#EndTimes: “Behold, I am coming soon! My reward is with me, and I will give to everyone according to what he has done. I am the Alpha and the Omega, the First and the Last, the Beginning and the End.”

It's enough to make a person think Marx was right: some significant fraction of the U.S. citizenry are high as a kite. Right-wing "news" feeds their fears; fantasy obsessions drive their actions. And they are all on their own, alone in an incomprehensible landscape which can mean anything they can make it mean.

How many of us are they? Fifteen percent perhaps. The rest of us have a big job.

This post is a coda to my religious landscape series.

U.S. religious landscape 2021:
What is sacred?
Evangelical Christians: but how can they?
Roman Catholics in sunlight
White Christian insurrectionists and fellow travelers
A coming out for liberal religion

Posted by janinsanfran at 7:54 AM