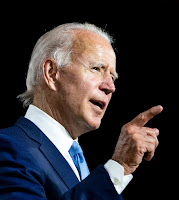 The "they" refers to social media platforms -- Facebook, etc. -- our outrage-for-profit amplifiers. He doesn't directly call out the crackpots, the wingers, and the Donald who spew gushers of garbage. He knows he can't directly reach the confused, angry and anguished consumers of this stuff. He might be able to shame/inhibit the medium in which it thrives.

But notably, he doesn't reach the conclusion that a lesser person might. We have a President whose response to social dysfunction is not simply to say "good riddance" -- after a year of lock-down, isolation, and dislocation, if they want to kill themselves by refusing a saving vaccine, let 'em go.

I'm sure there are few among us who have not had that thought. Like believing junk, it's only human.

But Biden doesn't go there. Dude is modeling being a civilized adult.

Posted by janinsanfran at 7:49 AM

Two vaccinated Tx State Reps playing hooky have tested positive. That alone ought to tell people not to be so smug and skip vaccinations.