How far has the oil spread in the Gulf now? 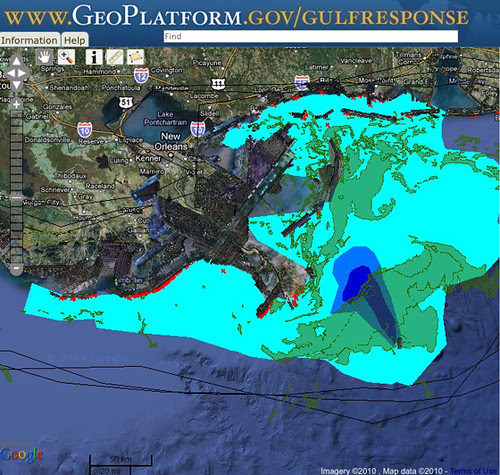 This latest map is available from the government here. It's extremely inclusive of a variety of data. Despite its detailed character I find the New York Times map tell me more about where the oil is and how it has spread over time.

Today's oil atrocity story was a Washington Post report that chronicled the extent of BP's inability to deliver what it promised regulators when they approved the well:

In the 77 days since oil from the ruptured Deepwater Horizon began to gush into the Gulf of Mexico, BP has skimmed or burned about 60 percent of the amount it promised regulators it could remove in a single day. ...

In a March report that was not questioned by federal officials, BP said it had the capacity to skim and remove 491,721 barrels of oil each day in the event of a major spill.

As of Monday, with about 2 million barrels released into the gulf, the skimming operations that were touted as key to preventing environmental disaster have averaged less than 900 barrels a day.

Meanwhile, at Jeff Master's hurricane blog, that seasoned observer of Gulf weather patterns has pointed out what we're in for this summer.

I hope [Hurricane] Alex will give the officials in charge of the BP oil disaster a bit of a wake up call. We've been told that five days are required to shut down operations in the event of tropical storm force winds are forecast for the clean-up region.

It is very unrealistic to expect a five day warning, since the average track error in a 5-day forecast is about 300 miles. Furthermore, we have little skill forecasting the formation of tropical storms, and it is often the case that a tropical storm forms just a 1-day journey from the Deepwater Horizon blowout location.

If we examine the incidence of tropical storm force winds in that region over the past five years, I suspect that they were successfully predicted five days in advance perhaps 30 percent of the time.

It's going to be a tough season until/unless BP gets this thing plugged.
Posted by janinsanfran at 3:00 AM