Diane Ravitch has changed her mind 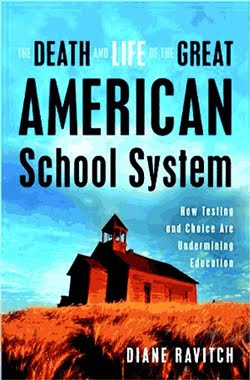 When I was employed during the 1990s working for racial equity in public education, Diane Ravitch was one of the leaders of what we saw as the enemy camp. A veteran of George H.W. Bush's Education Department, we saw her as part of a cabal of "reformers" who wanted to impose homogenous high-stakes testing, privatization by way of vouchers and charter schools, and authoritarian management practices on messy, but democratic, institutions that we too thought needed changes. There were people with good ideas out there like testing skeptics at FairTest, the progressive practitioners at Radical Teacher, and the academic advocates like Linda Darling-Hammond then at Columbia and Christopher Edley, then at the Harvard Civil Rights Project. Ravitch was then a heavy hitter against their ideas.

So when I heard she'd changed her mind on most of that I figured I should read her new book: The Death and Life of the Great American School System: How Testing and Choice Are Undermining Education. Her rejection of past enthusiasms is thorough. Some specimens: Most of Ravitch's new views are conventional among progressive reformers, but novel coming from her.

The part of the book from which I learned the most concerned the big foundations that have moved into educational policy in the last 15 years. Ravitch calls Gates, Walton and Broad "the Billionaire Boys' Club" and her attitude toward their interventions is scathing.

Each of the venture philanthropies began with different emphases, but over time they converged in support of reform strategies that mirrored their own experience in acquiring huge fortunes, such as competition, choice, deregulation, incentives, and other market-based approaches. These were not familiar concepts in the world of education, where high value is placed on collaboration. The venture philanthropies used their funds assertively to promote their goals. Not many school districts could resist their offers. ...

And so it happened that the Gates, Walton, and Broad foundations came to exercise vast influence over American education because of their strategic investments in school reform. As their policy goals converged in the first decade of the twenty-first century, these foundations set the policy agenda not only for school districts, but also for states and even the U.S. Department of Education.

There is something fundamentally antidemocratic about relinquishing control of the public education policy agenda to private foundations run by society's wealthiest people; when the wealthiest of these foundations are joined in common purpose, they represent an unusually powerful force that is beyond the reach of democratic institutions. These foundations, no matter how worthy and high-minded, are after all, not public agencies. They are not subject to public oversight or review, as a public agency would be. They have taken it upon themselves to reform public education, perhaps in ways that would never survive the scrutiny of voters in any district or state. If voters don't like the foundations' reform agenda, they can't vote them out of office. The foundations demand that public schools and teachers be held accountable for performance, but they themselves are accountable to no one. If their plans fail, no sanctions are levied against them. They are bastions of unaccountable power.

I have to wonder whether these epiphenomena of our present age of growing inequality will ever mellow in their philanthropic enthusiasms? The residue of the previous Gilded Age (such as the Ford, Mott, and Carnegie foundations) have moderated their arrogance to some degree, noticed a few failures, incorporated some diverse influences. But the new outfits are still feeling their oats, ricocheting around in the enormously complex arena of our kids' education with lots of money and without any need of exercise any of the less dramatic virtues such as prudence or doubt. I pity the kids (and teachers) who are the butt such well-intentioned experiments.

Calling out foundations' autocratic interventions is not something that most policy analysts can afford to do -- literally. Ravitch has the standing to speak truths that would cost less prestigious advocates their jobs. She does the vision of a public education system a great service with this denunciation of destruction passing as reform. Unfortunately, in public education the Obama administration is augmenting the failed policies of its predecessor so such voices are needed as much today as ever.
***
For all my gratitude for the stance Ravitch has chosen to adopt in this book, I should add that, as in the 1990s, Ravitch subsumes any attention to the lack of racial equity in all phases of the school experience under the category "achievement gap." When many children of color are still (within the law) relegated to schools without textbooks, enough chairs, or even heat in winter, while white students attend gorgeous modern facilities and meet less harried, better paid teachers, race still matters in public education. She must know this, but it still doesn't seem to have penetrated to the center of her educational concerns.