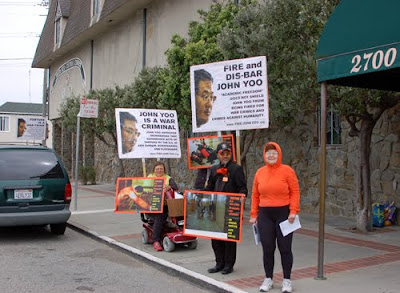 These good folks were outside the Irish Cultural Center in the San Francisco's Sunset District Thursday to greet John Yoo, the featured speaker at an Association of Former Intelligence Officers luncheon.

The pickets' message was simple:

Crimes are crimes no matter who does them. Crimes under Bush are crimes under Obama and must be resisted by anyone who claims a shred of conscience.

There's not much doubt about their case: Yoo's legal arguments for torture were called "shoddy" and "biased" by government investigators. He wrote what his bosses wanted and excused patently vicious treatment of prisoners.

In the interests of absurdity, I should probably add that Yoo denies that banging helpless prisoners into walls and half drowning them is "torture." He should get a taste of such treatment if he wants any credibility for that statement.

I'm glad to see that Yoo is dogged by protesters, however feeble such efforts seem. After all, the guy is still ostensibly fat and happy, a law prof and a mini-celebrity within the torture wing of Republican Party. But it must be wearing to be labeled and denounced as a criminal everywhere he goes.

His accomplice in legal chicanery, the lawyer Jay Bybee who Prez George W. made a federal judge, whines because his name will forever be sullied by his advocacy for torture. According to the New York Times, he thinks he's the victim.

"I have regrets because of the notoriety that this has brought me," he said. "It has imposed enormous pressures on me both professionally and personally. It has had an impact on my family. And I regret that, as a result of my government service, that that kind of attention has been visited on me and on my family."

Poor thing -- his dirty work violently broke hundreds of mens' minds and spirits and he has to put up with being thought a monster.

The responsible adults here are pretty clearly the apparently weak pickets. They tell the truth, again and again; they stand on solid ground while the torture apologists flail. Their witness recalls us all to our humanity.
Posted by janinsanfran at 4:00 AM

Good for these people, and I thank them.