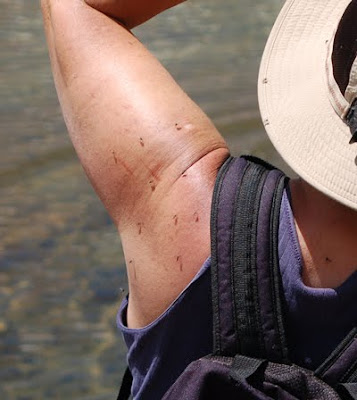 Has anyone reading this ever been chased off a peak at over 10000 feet by mosquitoes? This happened to us last week in Yosemite National Park -- twice! I know this was a fairly wet winter and some patches of snow remained, but this was like trying to camp by a lake in Minnesota in June. We were swarmed by biting bugs. Climbing meant swallowing one occasionally while panting. Yuck! The Sierra Nevada mountains were glorious as always, but usually when you get up that high, the wildlife is restricted to a few marmots.

I turned to the internet to see whether we were seeing the leading edge of global warming.

Apparently I'm not the only one who had that thought. The Florida resort of Key West is being plagued by alarmist reports that mosquitoes arriving from Central America are spreading dengue fever. Just what that city of the hotels and bars needed in a recession. Some scientists expect the mosquito-borne disease to spread on the Gulf Coast, but perhaps most alarmingly the Centers for Disease Control is being forced by budget troubles to cut the division that tracks such invasive, insect carried diseases. According to the New York Times,

The disease centers confirmed that the 2011 budget does eliminate financing for the “vector-borne” disease branch, which tracks dengue, West Nile virus, plague, encephalitis and other illnesses carried by insects.

Dr. Ali S. Khan, deputy director of the National Center for Emerging and Zoonotic Infectious Diseases, said that the disease centers had to make budget cuts, and that the vector-borne disease branch was one. But he said other money could be used to pay for some of the work it used to do.

More than a dozen medical organizations have signed a letter to Congress, asking that the money be reinstated.

The report does not attribute the dengue threat to global warming; good scientists are careful not to generalize from anecdotal samples. But it sure would be reassuring to know the government had the resources to watch developments.
***
On the other hand, after all the alarms of past years, mosquito-borne West Nile virus does not seem to be marching triumphantly through California as some feared a few years ago. The state monitoring center reported only one human case last year and four this year.
***
One of the most fascinating tidbits of mosquito lore I found on the web was a recent article in Nature that explored what harm might follow if we succeeded in eliminating these biting pests. Scientists aren't usually fans of doing away with species, but in this case

... there seem to be few things that mosquitoes do that other organisms can't do just as well -- except perhaps for one. They are lethally efficient at sucking blood from one individual and mainlining it into another, providing an ideal route for the spread of pathogenic microbes.

"The ecological effect of eliminating harmful mosquitoes is that you have more people. That's the consequence," says Strickman. Many lives would be saved; many more would no longer be sapped by disease. Countries freed of their high malaria burden, for example in sub-Saharan Africa, might recover the 1.3 percent of growth in gross domestic product that the World Health Organization estimates they are cost by the disease each year, potentially accelerating their development. There would be "less burden on the health system and hospitals, redirection of public-health expenditure for vector-borne diseases control to other priority health issues, less absenteeism from schools", says Jeffrey Hii, malaria scientist for the World Health Organization in Manila.

Thousands of public health workers are working on this.
***
Meanwhile, the little buggers keep biting. There's lot of lore, almost all of it spurious, about why the bugs choose particular individuals for their blood-sucking assaults. I enjoyed this imaginative sample:

It seems that mosquitoes have discriminating pallets. Did you know...that mosquitoes prefer children to adults; women to men; blondes to brunettes; people who have smelly feet and women who are ovulating? They also bite 500 more times often during a full moon.

Bring on the DEET!

Blogging may be light for the next few days, though I've pre-posted some material. I'll be on the road driving around the Northeast and will update on how the mosquitoes are faring in places where the heat is soaring. Did the larvae boil?
Posted by janinsanfran at 4:00 AM

" I know this was a fairly wet winter and some patches of snow remained, but this was like trying to camp by a lake in Minnesota in June."
Interesting hypothesis. Now that you've done the field work in Yosemite, I think you should come to visit in Minnesota and test your theory sometime!