How to respond to a PR crisis 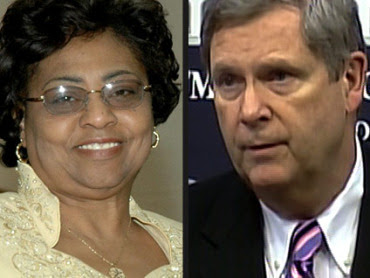 The Obama administration has been enduring public humiliation, having rushed to force the resignation a black USDA employee falsely charged with racial bias against white dirt farmers, only to have been shown to have swallowed a rightwing hoax and had the charges refuted by both the evidence and the dirt farmers. Pretty bad. Agricultural Secretary Tom Vilsack has now offered the wronged employee a public apology and a job. He sounded quite contrite.

"I asked for Shirley [Sherrod's] forgiveness, and she was gracious enough to extend it to me," Vilsack said, accepting "full responsibility" for forcing her to step down.

"I did not think before I acted and for that reason this poor woman has gone through a very difficult time," he said. "This was my decision, and I made it in haste."

In this last bit, he's defending the White House from charges that it pressed him to deep-six Sherrod in order to quiet the furor rightwing media were ginning up. The denial isn't likely to be believed, but otherwise, Vilsack seems convincing.

The other day I ran across a succinct description of how an institution should handle a public relations crisis. I saved it, not knowing when I might find it interesting. Now I know. Here's the prescription. (I've cut the specifics of the incident described to extract the general principles).

Acknowledge the mistake, apologize for it, and explain how you won't let it happen again. ... Do this emphatically and repeatedly for a while. Avoid the passive voice, or qualifiers to your apology or explanation. Embrace the bottom line -- you screwed up, you're sorry, you won't do it again, and you're implementing substantive changes. Let the aggrieved parties know that you really care about them. Then shut up and listen for a while. Make at least some of the changes those aggrieved parties recommend.

Having gone through this process with clients a few times, I know it's a lot harder than it looks. People have pride. They may feel that not all the facts are getting out there. They may be worried about liability, and they retreat to a bunker, thinking they should remain silent until the whole thing blows over. Sometimes they feel they really haven't done anything wrong, even if the wrongdoing is obvious to everyone else. When it's your company, or your organization, or your reputation, these are all understandable reactions. The actions these reactions prompt, however, typically make matters much worse.

My emphasis. If that's the standard, and I think it is, it looks like the Obama folks were able to sink their pride and fairly quickly take a better course. Any other action would not only have been wrong -- it also would have been a terribly damaging admission of inability to respond to a minor but telling crisis.

Much of my criticism of the Obama administration has arisen from shock that the crisis management apparatus that so deftly managed the 2008 campaign (any campaign is a minefield of unexpected eruptions) had apparently dissolved once the Prez took office. Let's hope this little episode presages a revival of past sure-footedness.

Posted by janinsanfran at 3:38 PM

So why does Jim Messina still have a job? I doubt the men and women in that White House bubble have learned a damned thing.