"The Decline: The Geography of a Recession," was created by labor writer LaToya Egwuekwe. It shows the growth of unemployment county by county from January 2007 until July 2010.

Greg Sargent has the skinny on why Republicans think this picture is just fine.

The larger Republican strategy -- explained to me privately by Republican aides -- is rooted in the fact that they believe dragging out any discussion of unemployment helps the GOP in the long run. ... But their larger strategy is all about casting doubt on the efficacy of the stimulus in particular and on the failure of the Dems' big-spending ways in general.

Republicans think that it feeds their larger argument, particularly among independents, if Dems continue to ask for more money to help the jobless (drawing attention to the fact that Dem spending policies have yet to fix the economy) while Republicans continue to insist that government find the money to pay for it.

This isn't about Republicans banking on mass economic suffering to help them at the polls. Rather, they're dragging out the discussion of unemployment in the belief that the public will conclude that Dem policies have failed -- and that Dems have their heads in the sand about how much money they wasted on their pie-in-the-sky liberal dream schemes.

One of our two major political parties doesn't care who it puts the screws to in other to regain power. This should be considered sociopathic.

At least the other party thinks that it has to throw a few bones to the majority of the citizens if it wants to keep its jobs.

H/t to Time Goes By for the clip.

***
And here's another map detailing what will happen to job training programs funded by the stimulus if Republicans don't relent. 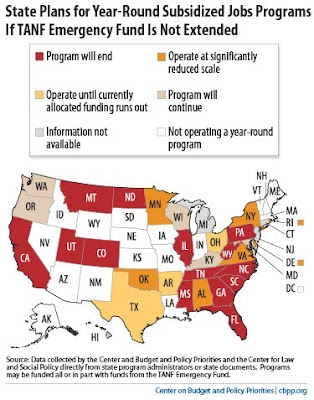 After two years of sending reams of resumes and constantly updating them to fit the job description and only getting one valid interview (two others as a temp) my daughter got a job through the Putting Americans to Work stimulus program. It is working and the Republicans want to kill it. Arrrrgh!

It really angers me that the public are so easily gulled.

What really angers me is that the administration and the "leaders" of the Democratic party are participating in the gulling:

>> Instead of a series of op-eds by Christina Romer, Larry Summers, Jared Bernstein and other members of the administration making a strong, strong case for more stimulus -- particularly that devoted to job creation -- along with the president himself making the case to the nation, the appearance of key administration officials on Sunday talk shows to bolster the effort, and so on, the administration has decided to try and sell a recovery that hasn't yet taken hold. <<

Sorry, the link was supposed to be the url that's below Thoma's name.