No immigration reform any time soon

President Obama spoke on immigration reform Thursday. I actually watched the speech. I'm sure that despite promotional emails from -- take your choice: Organizing for America/the DNC/some organ of the fall Democratic campaign -- very few people paid any attention.

As usual, the President demonstrated that he actually understood the complex of issues. That's one of the reasons I find him so disappointing: since he does know what is going on, why does he show so little urgency about fixing it? The peroration was borrowed from Emma Lazarus' poem inscribed on the Statute of Liberty. (I kid you not.) Hard to believe his speechwriters couldn't come up with something slightly more novel.

He blamed Republicans for walking out on reform. This is true.

So why should any Republicans help fix a system that Obama called "broken," a mess of "patchwork fixes and ill-conceived revisions"? The previously camouflaged horde of racist toads that have crawled out of hiding as Tea Partiers, Minute Men, and their Arizona friends make it doubtful that hardly any Latino will vote Republican for many decades. So why would the GOP enfranchise more such hostile voters?

Of course Latinos may not vote for foot dragging Dems either, but historically they have come around, despite the Donkey Party's lukewarm overtures.

According to population estimates from the Census, by the year 2050, 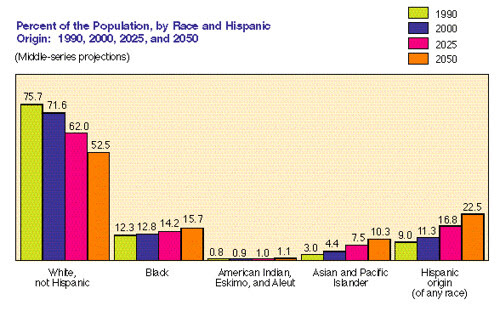 More from the Census:

That's both legal and undocumented immigration, I think. Those people are mostly simply not going to vote for Republicans.

In fact, the Republicans' only hope is probably repealing the 14th Amendment -- the one that says that people born in the United States are US citizens. Their Senate candidate in Kentucky, Rand Paul, is on the case.

"Many argue that these children that are born to illegal aliens are really still under the jurisdiction of the Mexican government," Paul said in an interview earlier this week with Right Wing News. "I think we need to fight that out in the courts. If we lose, then I think we should amend the Constitution because I don't think the 14th amendment was meant to apply to illegal aliens. It was meant to apply to the children of slaves."

I know people who would argue that low wage workers without papers are modern slaves. Not quite, I think, but way too close.

I don't think that Republicans will succeed in repeal, but we can never say never. Look for some of them to take a serious run at this.

What can break the immigration impasse? Hard to see. Economic prosperity would help; people who are already here could be less anxious about holding on to what we have. The signs aren't good for that anytime soon.

Eventually, the children of recent immigrants will be a far greater portion of the electorate -- but will divisions among them keep them from acting as a bloc, keep all pushing in the same direction? Possibly they'll manage that on immigration reform, but there is nothing automatic about progress that requires a coalition.

As in California in the 1990s, working for national immigration reform needs to involve 1) arousing the sleeping giant and getting new citizens voting as rapidly as possible and 2) building broad coalitions because there is no demographic segment that can do this alone, even though the proportion of people much closer to the immigrant experience will rise rapidly.

Full disclosure: I worked most of the decade of the 1990s in California politics and organizing on projects to help Californians of color overcome the nativism and racism that dominated the state's elections in that time. The national picture looks a lot like what we confronted in 1994 here.