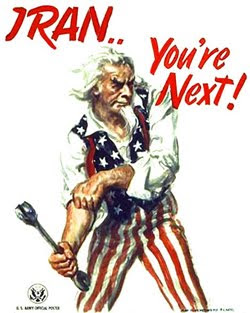 Marc Lynch has more confidence in the powers-that-be than I do. The usual suspects -- U.S. admirers of the Israeli right, the inveterate imperialists, the bellicose bullies -- are talking up bombing Iran again. Lynch, a professor at George Washington University and editor of Foreign Policy's Middle East Channel, notes the rising noise level. But he is confident that this is merely the reflexive gibberings of Washington's perennial warrior chest thumpers.

An attack on Iran would still be a disaster, unnecessary and counterproductive, and the White House knows that, and it's exceedingly unlikely that it will happen anytime soon. But the real risk is that the public discourse about an attack on Iran normalizes the idea and makes it seem plausible, if not inevitable, and that the administration talks itself into a political corner. That shouldn't be allowed to happen.

In the broad scheme of things, this administration's job has been, and remains, to extricate this declining power (yes, that's us -- the ever-so-powerful U.S.) from imperial overstretch. The world has moved on; we don't run it. We live in it, among other peoples, many of whom are on their way to their own special glories and challenges.

When Lynch says "the White House knows," he is exaggerating. U.S. politicians aren't allowed to "know" the real constraints within which their country is operating. They must run a con game (usually even on themselves), either promising glorious triumph over the enemies of the moment or deflecting attention from challenges while managing intractable realities. The current set in power -- we hope -- is an ascendancy of the second type.

As has been the case throughout our history, the U.S. people have to interject themselves into this charade. Though we enjoy chest thumping and the violence of American football, we, usually, don't much like wars if forced to notice them. We don't want our own getting killed in faraway places. We learn, over and over, that, as that tough old bird General Smedley Butler concluded: "War is a racket."

Politicians are always surprised when we notice the wars of empire. But despite occasional outbursts of xenophobia, at root "we just want to get along." Can the White House keep that in mind? It is never easy.

Posted by janinsanfran at 8:14 AM