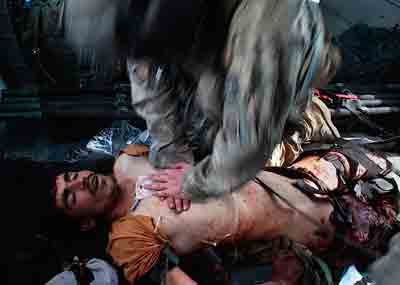 Over the weekend, one of our Establishment pundits, Fareed Zararia, the editor of Newsweek's international editions and CNN host, asked a sensible question about the Afghanistan war:

"If Al Qaeda is down to a hundred men there at the most," Zakaria asked, "why are we fighting a major war?"

Noting that there were more than a hundred deaths among NATO soldiers last month and that the war is estimated to cost the US more than $100 billion this year alone, Zararia wondered again,"Why are we fighting this major war against the Taliban? ... If al-Qaeda itself is so weak, why are we fighting against its allies so ferociously?"

"The whole enterprise in Afghanistan feels disproportionate," Zakaria remarked, "a very expensive solution to what is turning out to be a small but real problem. "

The comments are almost more interesting than the question:

We let America get attacked and we let the Attackers get away. That's why we're fighting in Afghanistan. Waving our meaningless gestures of anger and retaliation. Because you don't attack America and get away with it. ...

It's all about the money . War is a racket . A hand-full of Cheney types are making tons of money. ...

...Because some people are getting rich from it, you dumb fuck.

One commenter thinks Obama is a "murderous psychopath," to which someone responds: "And Bush before him."

Though I almost certainly differ on a lot of details with Zakaria and all these commenters, the matter is clear: this country has no idea, and certainly no agreement, on why we are getting people -- Afghans, NATO allies, and U.S. troops -- killed in Afghanistan. That fact ought to be enough for a democratic leader (small "d") to draw the conclusion that it is time to end the losses.

James Carroll at the Boston Globe recently asked questions that points to one factor in our current, incoherent, angry moment:

A psycho-medical diagnosis -- post-traumatic stress syndrome -- has gained legitimacy for individuals, but what about whole societies? Can war’s dire and lingering effects on war-waging nations be measured? Can the stories of war be told, that is, to include aftermath wounds to society that, while undiagnosed, are as related to civic responsibility for state violence as one veteran’s recurring nightmare is to a morally ambiguous firefight? The battle zones of Fallujah and Kandahar are far away, but how do their traumas stamp Philadelphia and Kansas City -- this year and a decade from now?

The existence of a professional ("all volunteer") army that has carried pretty much all the burden fighting the empire's continuous faraway wars makes it easy to imagine that their horrors have not imprinted all of us. But is that true?

Yes, the Great Recession is making us (appropriately) cranky. Jobs, jobs, jobs would help. And BP's oil poisoning the Gulf of Mexico is (appropriately) revealing frightening limits to what our technology can do for us.

But a constant background of meaningless wars, of atrocious deaths and unanswered questions, is certainly stoking this summer of discontent.

About the photo: An American medic in the 82nd Airborne Combat Aviation Brigade gives CPR to a grievously wounded unidentified Afghan National Army soldier (ANA) in a Medivac helicopter November 1, 2009 in Kandahar province, Afghanistan. The soldier, who later died of his injuries, had stepped on a land mine planted by insurgents severely wounding his legs. (Photo by Chris Hondros/Getty Images) We don't usually look at these scenes.