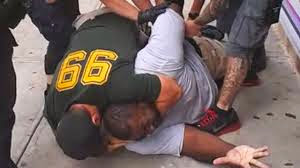 Last week, Tari Williams of Greater Birmingham Ministries, found herself trying to explain to her 15 year old son: how could unarmed Michael Brown be killed by a police officer, yet a grand jury saw no crime.


After the verdict was revealed [on broadcast TV], he looked at me and said, “What does all of this mean?” ...

I explained to Asa that it is easy to assume the worst. It is easy to hurt and even kill something or someone you feel no attachment to, have no feelings for and see no value or meaning in.  And, that’s what happened in these cases.

Apparently Officer Pantaleo didn't see his son or brother in Eric Garner either when he choked him to death. Apparently the criminal justice system is no more able to deliver some measure of justice to Black men in New York City than in Ferguson, Missouri.
Posted by janinsanfran at 2:31 AM

This isn't even just racism. It's systemic failure of a system of law and order that has let us down as it has turned to bullying and reckless intimidation. It concerns me a lot as it's throughout all our communities. I keep wondering what do we do to fix it? It sure didn't help when they gave all the local law officials the Iraqi military equipment. It sets all the wrong vibes. When the country has been unwilling to do anything reasonable about gun control for citizens, the whole thing just escalates and here we are with killings that absolutely make no sense at least not to a rational person. Just tragic.