Into the dark jungle that is Congo 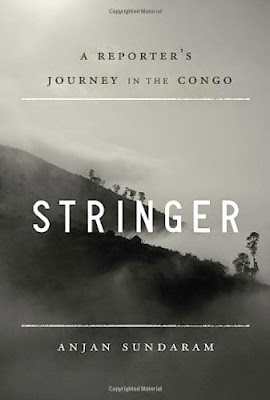 I picked up Stringer: A Reporter's Journey in the Congo by Anjan Sundaram because I wanted to know more about the country and the deadly war in its hinterland that most of the world has ignored for decades.

Instead I learned a good deal about Mr. Sundaram. This aspiring journalist broke away from a potential US career path in academic mathematics or among the quants at Goldman Sachs, threw himself without financial backing into one of the poorest and most insecure human environs available, and lived through a series of wild misadventures to tell the tale. He's a vivid if somewhat florid writer. I was reminded of 19th century Western explorer narratives of tromping through darkest Africa -- all hardship and illness, bugs, disease and dangerous beasts, exotic natives, survived if not defeated by the author.

This is very much what Sundaram says he did not want to write about Congo. Reporting an encounter with Kinshasha street kids:

...what struck me was the freedom I had felt around the children -- they were free to seek pleasure; and they did, in sex and intoxication. Their lives were unbridled by the constraints and the repression of society. Yet almost every journalistic report, NGO statement and academic paper I found perverted their expansive lives and obvious pleasure, depicting everything as a wretchedness. It was important to me that the children be able to express themselves, in terms near their own, and not be described by a moral or even sympathetic prejudice imposed on their experience.

I would experience such incongruity repeatedly: in miserable.places I would find the most exuberant joie. It seemed to me both extraordinary and implausible, and at first I imagined it to be cosmetic cover-up, a mask worn to hide the suffering, or to help overcome it. That may have partly been true. But I also felt that the Congolese in their delirium truly forgot the misery, that they spoke in verse and caricatured their misfortune in genuine comic spirit and not for farce; it was their way of taking distance, I thought, of suspending the destruction of time. To a degree that exceeded any people I had known I found the Congolese able to isolate the present, and be satisfied. Theirs was a sort of amnesiac solace.

To give Sundaram his due, he describes the life of the poor but proud family with whom he boarded minutely; the terror amid boredom and massive theft that is the war also comes across; the violent and futile charade of Congolese electoral politics is here.

But in the end, this is a book about its author. Sundaram does not at all exude the smug self-referential confidence of 19th century Westerners in Africa, but I don't think I'm entirely off-based to characterize this book as a distanced, ironic 21st century contribution to same genre. Having failed to figure out much about Congo and what he was doing there, Sundaram tells his own quite dramatic story. Any insight into Congo is tangential. Maybe he is saying that's all any outsider can see? He might even be right.

Posted by janinsanfran at 8:25 AM

What if we abandoned the attempt to understand and just worked to mitigate? Worked, that is, for a higher justice? I guess that is what you do, for sure, Jan. I'm trying to reform myself right now, because I think I am too judgmental.