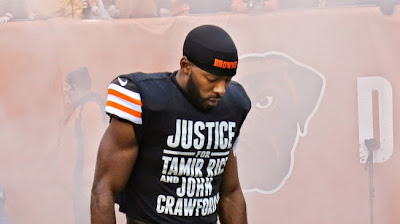 Cleveland Browns wide receiver Andrew Hawkins wore a practice shirt calling for justice for two Black victims of unjustifiable police shootings. If you are wondering, Tamir Rice was the 12 year old kid with a toy gun killed by Cleveland cops two seconds after they drove up to investigate him. John Crawford was shot by police inside a Walmart in Dayton, Ohio when he picked up a toy gun.

A police union was mightily pissed off by Hawkins' gesture, so the football player explained himself.

To clarify, I utterly respect and appreciate every police officer that protects and serves all of us with honesty, integrity and the right way. And I don’t think those kind of officers should be offended by what I did. My mom taught me my entire life to respect law enforcement. I have family, close friends that are incredible police officers and I tell them all the time how they are much braver than me for it. So my wearing a T-shirt wasn’t a stance against every police officer or every police department. My wearing the T-shirt was a stance against wrong individuals doing the wrong thing for the wrong reasons to innocent people.

Read the rest at the link. This guy knows what he is choosing and why ...

H/t TPM for aspects of the story.
Posted by janinsanfran at 3:27 PM