Not crying over Sony's costly screw-up 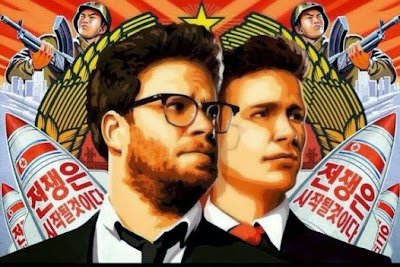 Yesterday the movie studio announced that it was canceling release of its upcoming comedy blockbuster about the assassination of the North Korean leader Kim Jong-un.

Well good. The company should have had enough sense to know that you don't make a movie about killing a sitting head of state, even if the target is a real two-bit thug from a half-bit country. Killing heads of state is not something to take lightly. Mock the slime ball, sure. But give yourself some deniability. Situate your plot in some invented country and let the audience figure it out of if you like.

Defenders of The Interview cite Charlie Chaplin's The Great Dictator; but note, Chaplin didn't name Hitler in his movie. And Hitler did qualify as a "great" threat. Aside from his unfortunate people and near neighbors, Kim is just a bizarre irritant.

The arrogance of thinking you can make this movie using real names boggles my mind.

The film cost Sony some $44 million to make and an additional $35 million to promote. I've barely been able to watch a football game in the last two weeks without seeing multiple ads.
***
And let's hope our spooks, having identified North Korea as the source of a massive, embarrassing hacking attack on Sony, use these events as an chance to figure out how to improve our cybersecurity. They don't need to respond with their own cyberwar. Let Sony absorb the hurt. Wishful thinking, probably.
Posted by janinsanfran at 5:00 AM

Email ThisBlogThis!Share to TwitterShare to FacebookShare to Pinterest
Labels: movietalk

I also didn't like using a real leader but then assassination pictures aren't on my list anyway given what our country has experienced. What bothers me about this is how well it worked to first hack then, embarrass them, and then threaten anyone who dares view this film. I think that's a bad trend which will limit exploring many serious subjects when it works :(

"The arrogance of thinking you can make this movie using real names boggles [your] mind."

Those exceptional AmerrKKKaners think they can get away with murder!

And they do here too!

Finally, some common sense. I see many movies and own a collection of over 500 films. Assassination films typically involve fictional heads of state, if it results in the actual murder, or use historical fact of an assassination.

The studio should NEVER have allowed this project to even be filmed, and Seth Rogen is another self centered idiot to have even proposed it.

@Darrelplant: interesting link. Don't think I much approve of that one either, though I might have had warm feelings about it, if I'd ever heard of it. Not good assassinating Presidents tho -- I lived through that era and I've seen my government do it from Congo to Cuba (botched, fortunately.)

But I also think there is a difference between low budget political commentary and a stupid studio's commercial blockbuster. The former probably deserves some protection; the latter is just garbage and I hope we don't have to go to cyberwar over it.

In addition to being stupid, for the CIA to assassinate a sitting head of state is -- through an oddity of history -- specifically illegal. One of the results of the Church Committee hearings into CIA activities in the 1970's was that President Gerald Ford issued an executive order prohibiting the CIA from doing exactly that. They're probably the only federal agency laboring under that specific prohibition. So yeah, JSOC can probably do it with impunity.