The Senate torture report is as nauseating as we expected. So much has leaked that the details don't seem all that surprising.

The country's shame remains. President Obama makes himself an accomplice after the fact by refusing to prosecute the perpetrators and their intellectual enablers.

Both DiFi and John McCain were at their best today. I've never been able to stand either of them, but credit is deserved.

It's so nice to know that two crackpot psychologists (James E. Mitchell and Bruce Jessen, redacted but identified by the Times) who sold our spooks on a "scientific" protocol to crush the humanity of captives seem to have sucked up $81 million of our tax dollars on their brutal little games. Forbes is good on the profiteering trail.

Erudite Partner will be joining Juan Mendez, UN Special Rapporteur on Torture, in a Human Rights Day webinar, sponsored by the National Religious Campaign Against Torture, tomorrow, December 10, 9:30-10:30 am, PST. Click here to register and get details. 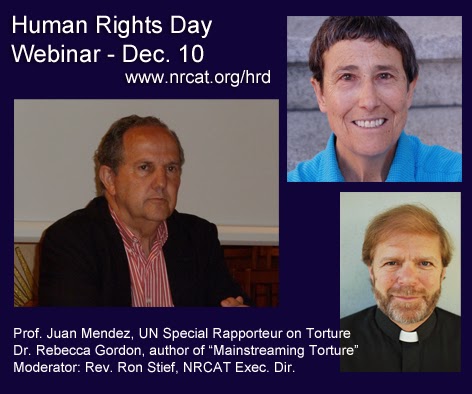 Posted by janinsanfran at 2:52 PM

I read a little of the report until I couldn't stand more. If we don't prosecute those who did this, what can we expect from those like ISIS? we gave them carte blanche and any possibility of taking the high road is gone. Do you see though, unless Bernie runs, any possibility of a candidate on either side who will do other than what Obama did :(

Rain: It's true that it is hard to see how the necessary prosecutions come to pass -- but it was improbable that we'd ever see DiFi or John McCain speaking out. It was improbable in Chile that Pinochet would ever be brought to trial.

When it comes to torture, making right is a long struggle and takes time. So I am not going to say "never."

And the CIA people know that more than we do -- that's why they fight disclosure so hard.

I'd feel the odds were better if I thought Bernie or Elizabeth had a chance to get the Presidency! Either one might go for it even if it involved Obama. As it stands, with our country like it is, they can't win and anyone who can won't do a thing about any of this :(