Six Guantanamo inmates sent to a land that knows torture 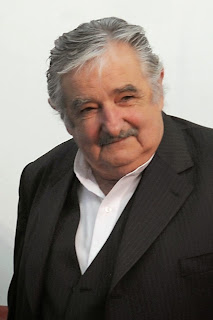 The Obama Administration, by way of lame duck Secretary of Defense Chuck Hagel, has gotten around to sending six of the remaining captives from Guantanamo to Uruguay. According to an L.A. Times account that leaves 136 prisoners of whom 67 have long been cleared for release. The six who have just been shipped to Latin America had been locked away in our gulag without trial or even charges since 2002. They had been cleared for release since 2009.

Uruguay's President Jose Mujica is not playing the empire's game by taking in these men.

Mujica said the men will be free to leave Uruguay any time.

“To me, refuge is among the most noble institutions that humanity can boast,” Mujica, en route to Ecuador for a meeting, told TV reporters. “There will always be someone criticizing you for it.”

Mujica said the Guantanamo base “isn't a jail. It's a kidnapping nest because a jail assumes it is subject to some sort of rule of law, with the presence of a judge with a judicial point of view. And there is none of that there.”

President Mujica knows a lot about indefinite imprisonment. During the 1970s and early 80s he was imprisoned by his country's military rulers for some 13 years. For several years he was confined to the bottom of an old, emptied horse-watering trough. Held in solitary, he developed auditory hallucinations and paranoia. When Uruguayan democracy was restored, Mujica became a populist politician and eventually was elected President.

Mujica's background points up the absurdity of John Kerry, Bush-era war criminals, and various current Republican office holders whining that release of the Senate committee's report on CIA torture will shock the world and thereby somehow make it a more dangerous place than it already is. People around the world know what the United States does. The people of Uruguay in particular know far too much about torture.

It's not from the likes of President Mujica that our rulers want to hide the full truth. It's from we the people of the United States.
***
Carol Rosenberg at the Miami Herald provides a list of the men released:

▪ Abdelhadi Faraj, born in 1975 or 1981, a Syrian captured in late December 2001 in Pakistan, after fleeing Afghanistan through the Tora Bora mountains, arrived at Guantánamo in June 2002. He was held as Prisoner No. 329.

▪ Adel Bin Mohammed Ouerghi, 49, a Tunisian whose capture history is murky, and for whom no Guantánamo photo has been leaked. He arrived at the U.S. Navy base in Cuba in May 2002, and was held as Prisoner No. 502.

▪ Abu Wa’el Dhiab, 43, a Syrian, was captured in Lahore, Pakistan, in April 2002. He got to Guantánamo in August 2002 and since the outbreak of the current, long-running hunger strike has sought a federal court order to stop his forced-feedings. He was held as Prisoner No. 722.

▪ Ahmed Adnan Ahjam, 37, a Syrian, was captured in late December 2001 in Pakistan, after fleeing Afghanistan through the Tora Bora mountains, and arrived at Guantánamo in June 2002. He was held as Prisoner No. 326.

▪ Ali Hussein al Shaaban, 32, a Syrian, was captured in late December 2001 in Pakistan after fleeing Afghanistan through the Tora Bora mountains, and arrived at Guantánamo in June 2002. He was held as Prisoner No. 327.

▪ Mohammed Taha Matan, about 35, a Palestinian, was captured in a series of raids on suspected al-Qaida safe houses in Faisalabad, Pakistan, in March 2002 on the same day and in the same city that the the CIA and Pakistani security forces captured a high-value detainee known as Abu Zubaydah. He got to Guantánamo in June 2002 with more than a dozen men captured that day, many of them since released. He was held as Prisoner No. 684.