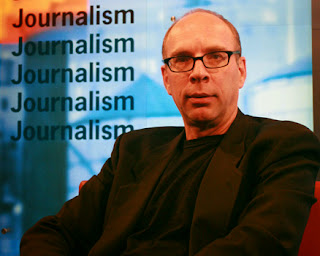 Media professor and gadfly Jay Rosen has put up an interesting post at PressThink about the understanding that anyone going into journalism had better be prepared to cultivate about the business models that technological and social changes are forcing on their profession.

Journalistic enterprises are all struggling to replace the system in which advertisers with few choices for reaching their target customers paid for content -- both "popular" and "serious" -- that would attract the readers and viewers they wanted to reach. The creators of the content, the journalists, proudly disdained the activity of the "business side" of a metaphorical wall where the money grubbers scrambled to fund the journalists' noble undertaking. (Very likely nothing truly this smoothly functioning ever quite existed, but the myth commanded allegiance nonetheless.)

This model no longer pays the bills because advertisers don't have to buy "content" that is more or less irrelevant to their market needs, such as, for example, local election news or investigative reporting that rattles any cages. They might be happier with nothing but weather and sports. And, indeed, as online media proliferate, advertising revenue will no longer be enough to pay for journalism as we have thought of it. Rosen insists that journalists can, and must, think differently in this difficult environment while retaining their professional integrity: Rosen enumerates some ideas for how such a media organization might work in another post.

I was struck by these points because they seemed so familiar. In my work on political campaigns, the same willful misunderstandings that Rosen calls out in journalism play out far too often. This is counter-intuitive. Campaigns are almost always topdown, disciplined structures with little pretense of collegiality. Anything legal goes; the ethical standard is a bald utilitarianism, with little pretense of any higher values. But nonetheless, something like what Rosen describes in journalism goes on in too many campaigns:
Posted by janinsanfran at 6:00 AM