Mary Moylan: too Irish to be a pacifist

Brendan Walsh: "They never got Mary ..."

That comment, almost a throwaway line in the film Hit & Stay, haunts me. 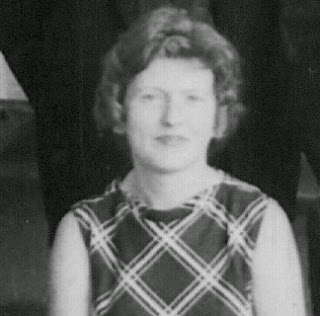 Mary Moylan was one of the Catonsville Nine, antiwar activists (mostly Catholic) who burned draft files with homemade napalm in 1968, thereby modeling a new style of resistance to the Vietnam bloodshed. They were convicted at trial; some of them including Mary chose not to report to serve their sentences. The far better known Fathers Berrigan played peekaboo with the F.B.I. and were caught soon enough. But Moylan, one of only two women in the action, chose to disappear from public view in a different manner, losing herself in the burgeoning women's movement. She only surfaced nine years later and then served a year in federal prison.

All this was long before the internet; Google doesn't have much to tell about this woman who went her own way in this very male-oriented culture of protest. She died in 1995, no longer apparently connected to any community. The most illuminating material comes from a friendly memorial article by Carl Schoettler in the Baltimore Sun.

... she was so successful in her Orphic descent underground she lost contact with old comrades and her friends and her family. Some of the people who loved her most never saw her again. Lots of people knew a little bit about her, not many everything. She became a cherished, shadowy memory.

Mary Moylan died sometime in late April in Asbury Park, N.J. No one knows quite when; no one wrote an obituary. ...

"Mary was the kind of person who stood on her own two feet and developed her own positions and stuck by them stubbornly," says Suzanne Ross, an activist in the women's movement, who arranged a memorial for Ms. Moylan in New York City. ...

Willa Bickham and Brendan Walsh, the couple who have devoted their lives to serving soup and love at their Viva House table [in Baltimore], did keep in touch with Ms. Moylan during the years of her underground exile and afterward. They remember her as a pioneer of contemporary feminism who took pride in evading federal agents longer than any of the Catonsville Nine men who went underground on April 9, 1970, the day when they were all supposed to begin prison sentences. She was a strong woman in a movement pretty much dominated by men. And she knew it.

Soon after disappearing, she wrote in Hard Times, a radical journal of the time, "When I realized four of the men were going underground, I did some re-thinking and decided because women's liberation is one of the most important issues being raised, I felt I had to do the same thing -- and do it with sisters, and with the help of sisters."

... Mary Moylan grew up in a very respectable, very Catholic Irish family in West Baltimore and in Parkville. Her father was a court reporter and her mother was a secretary at Johns Hopkins Press. She went to school at Mount St. Agnes and trained as a nurse at Mercy Hospital.

But she got irritated when people labeled the Catonsville Nine "Catholic pacifists." She didn't feel very Catholic and not at all pacifist.

"I'm much too Irish to be a pacifist," she said long ago. "I have no relationship with the Catholic church nor do I want one."

... She believed in direct action.

"The idea of jail doesn't bother me that much," she wrote in her Hard Times article. "The idea of cooperating with the federal government in any way at all irritates the hell out of me."

These tidbits make me wish that more of a written record of this woman's life was accessible. She was a feminist pioneer who lived her convictions.

This post is an addendum that felt necessary to my previous post about the film Hit & Stay.
Posted by janinsanfran at 5:00 AM