The ACLU must have better things to do ... 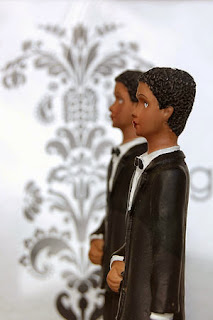 Eventually I came to understand that being able to marry in the eyes of the state was something that LGBT people needed in order to be full citizens with full civil rights. And we're getting there. (We're also getting there in religious institutions which seems much more important to me, since that is where we affirm our partnerships in the context of community.)

But I am damned if I am going to put energy into fighting for the right to buy wedding cakes and flowers from vendors who feel a need to distance themselves from gay marriages.

... refusals by the religious merchants — bakers, florists and photographers, for example — have been taking place for several years. But now local governments are taking an increasingly hard line on the issue, as legislative debates over whether to protect religious shop owners are overtaken by administrative efforts to punish them.

... In Colorado, where Mr. Phillips, 58, owns and operates a small bakery called Masterpiece Cakeshop, the State Civil Rights Commission determined that Mr. Phillips had violated a state law banning discrimination on the basis of sexual orientation in places of public accommodation. ... In New York, an administrative law judge fined Cynthia and Robert Gifford $13,000 for declining to rent their upstate farmhouse, which they often rent out for heterosexual weddings, for the wedding of two women. ... There have been more than a half-dozen other instances of business owners, most citing their understanding of Christian faith, declining to provide services for same-sex weddings.

... The cases are largely being fought, and some say fueled, by two legal advocacy organizations: the American Civil Liberties Union, which supports same-sex marriage, and the Alliance Defending Freedom, which opposes it. ...

I understand that we queers probably do have valid claims under public accommodation laws: if you are operating a public business, you can't go choosing not to sell your goods to some people while offering them to others.

But please -- do we really need to fight for our equal right to consume? In general, the sums that people seem to feel they must spend on weddings are a little gross. We're just starting in on this -- do we have to adopt the worst of straight customs? (Probably yes.)

But the hard-pressed nonprofits that fight for legal rights must have better places to use their resources than fighting for wedding props. If they want to serve our community, let them litigate for better rights at work and for transgender people who often lag LGB folks when it comes to equal protection of the law.
Posted by janinsanfran at 5:00 AM

I agree with you, but I also would never shop at any store that did this kind of thing. If such businesses paid a financial penalty, because of others not wanting to profit bigots, they might find their religious excuse less attractive to use! I am not a fan of boycotts but I also would not want the food created by this kind of hateful energy.

It's annoying,all right. Makes me wonder what people are really angry about.