We're suckers for these guys 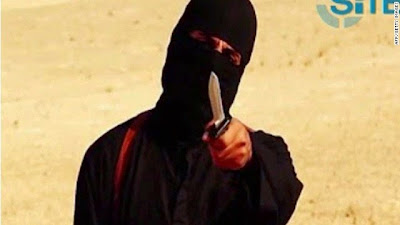 I think of Elizabeth Drew as an exceptionally well-sourced, extremely measured, commentator on Washington doings. She's been at it forever and never seems to resort to shouting to get our attention. Hence I find this, from a New York Review of Books post on the firing of Defense Secretary Chuck Hagel, haunting.

If its interests in an international situation aren’t great enough or worth the cost, the US can cut its losses and walk away. Or not even try. We’re not trying to fix failed African states—not Somalia (tried that, disastrously) or Congo. States, with their own long histories, have a way of being intractable to being fixed by outsiders—a lesson yet to be thoroughly absorbed by this administration. But even if the president wanted to disengage from Syria, says a senior adviser, “His hands are largely tied because of the brutal executions by ISIS.” It’s considered quite likely that ISIS will continue the beheadings; no one is sure whether the point is to provoke the US into a difficult war, but that’s the effect. A participant in the discussions of US policy in the Middle East says, “As long as ISIS is beheading Americans there’s no way the president can stand up and say that Syria isn’t our problem.” This is an assumption, not a fact.

Let's repeat that: “As long as ISIS is beheading Americans there’s no way the president can stand up and say that Syria isn’t our problem.”

I'm inclined to snark: why not? But that probably won't do so let's think seriously about this. ISIS (or any of the group's other names) behaves barbarously. What can the U.S. do?

Well -- the U.S. could perhaps, if we were willing to spend the money, go all John McCain in much of Syria and Iraq, and kill anything that moved. That would blow away a lot of people who had nothing to do with ISIS. It would destroy the frayed fabric of international norms protecting nation states and sometimes civilians that we thought had been established in the post-World War II era. Most of the victims would be people who had also been preyed upon by ISIS. But this would be a fine barbaric response to barbarism. We might do it, if we weren't too cheap.

Or the U.S. could simply say that anyone fool enough to enter the orbit of ISIS is on their own. If the guy with the knife comes for you, that's your business. This would do nothing for Syrians and Iraqis living under the guns of the nut cases, though it might give them a better chance of survival than the blow-'em-all-away alternative. Or not.

As Drew and her sources say, fear of popular opinion won't allow our rulers to adopt the second alternative. The first alternative would only be popular so long as there was zero blowback -- not likely. So the United States is having its agenda set by a bunch of black clad thugs with big knives. I guess our rulers will just muddle along. Eventually they'll jump one way or another and we the people may be forced to decide what we actually wanted, as well as live with the consequences. Iraqis and Syrians will remain trapped in all forces' muddling. None of this is comforting.
Posted by janinsanfran at 5:00 AM

I don't think it's so much the majority as the loudest-- that determines a lot of what we do on many policies-- unfortunately. A good lie takes right or left a long way-- works a lot better than a hard truth. Mark Twain had some good things to say about that years ago. One of my favorites, paraphrased, A lie can go around the world before a truth gets its shoes on. Worse the lie is believed if it suits a certain partisan agenda and truth won't get a hearing even later!

Unfortunately, the truth is that seen from my part of the world it is the USA and their allies who created those guys :(

Who understands French, can learn a lot from this interview of George Corm (a Lebanese)
http://www.dailymotion.com/video/x2ay5am_georges-corm-invite-de-cuntrastu-il-faut-deconstruire-les-cliches_news

Sorry, I am not following what the non-Arabs are saying. Because all in all, the Europeans and Americans (except for some very few) do not know much about my part of the world, although many think that they know it all :)

BTW is anyone speaking about the incredible numbers of Syrian refugees in Lebanon? We consider the Americans responsible for the catastrophe befalling our country.