Only one boat, sinking or floating, on only one planet 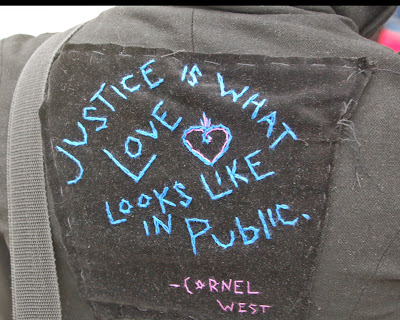 In a lot of ways, 2014 was an awful year. I'll skip the catalog; every reader here lived it.

But I want to call out what strikes me as an important straw in the wind pointing to better times: lately the hip environmental/climate-hawk magazine Grist has been on a tear, trying communicate to its presumably nerdy, almost certainly white, and likely male, audience that the only way forward involves getting behind the justice demands of people of color, especially Black people.

Brendan Mock, a Black man who carries the title "Justice Editor," has been churning out article after about the differential effect of planetary warming on communities of color. But when a grand jury failed to indict the police officer who choked Eric Garner to death, it all came together for Mock. He learned the news while lying in an emergency room bed, having just been diagnosed with a tumor in this chest.

Many will continue to refuse to connect green issues to black bodies and red blood spilled in the street. Many others will continue to ignore the festering sores of racism, police brutality, and the ongoing vestiges of white supremacy. Ignorant or not, those issues will still grow, and when they do, they’ll touch nerves and cause deeper pains for everyone. Metastasis sets in irrespective of its acknowledgment. ...

Please allow my own life as the analogy: I can’t feel this tumor, or whatever it is, in my chest, but I do still feel the throbbing ache in my back. The two problems may be unconnected. But resolving my spinal pain won’t matter much if I let this thing in my chest take hold of my heart.

If Mock were just an isolated token in the Grist world, his epiphany wouldn't matter much. Adopting tokens is one way white supremacy maintains itself. But he's not alone.

Cops must treat the people they encounter — the man standing on the corner, maybe hustling loosies, the kid walking home from school with the sagging pants, the people hanging out in the playground — with respect. Otherwise, the police threaten to chase away the pedestrian vitality that gives cities their spirit.

And here's Greg Hanscom on the lessons of the year:

... if 2014 taught us one thing, it’s that, while cities hold tremendous promise as the source and drivers of climate solutions, unless and until we deal with underlying injustice and inequity, they will never realize that potential. The good news is, thanks to some brutal news in 2014, we are now poised to address those issues in a real and concerted way.

I have pointed before to Grist's female token's Heather Smith explaining the BlackLivesMatter movement to their readers.

I have to ask myself, how much of this newly emphatic positioning from a climate magazine derives from its intellectual heart, editor David Roberts, affirming that climate hawks are on the Left, like it or not.

Climate hawks see a problem that markets will not solve on their own, one that requires long-term planning and some measure of international governance. They see a need for new taxes, regulations, and public investments.

They see an enormous injustice underway, as countries that have grown wealthy burning fossil fuels now stand to visit unthinkable suffering on countries that remain poor and have produced very little climate pollution. Indeed, a hyper-rich global elite is producing a wildly outsized share of the carbon.

Since everyone can’t produce as much carbon as the 1 percent and preserve a liveable climate, either grotesque inequality must stay in place or, as the global poor rise, the global rich must reduce their share. So the climate struggle is inevitably about redistribution, about the spoils of the few vs. the interests of the many. Nothing is more anathema to the current right.

Conservatism seeks to preserve the status quo, which in the U.S. means oil, coal, suburbs, consumerism, and inequality. ...

From there it is not far to recognizing the centrality of the movement for justice for people of color being oppressed by police. Not far at all. We only survive what we have made together; the rest is illusion.

Posted by janinsanfran at 7:42 AM