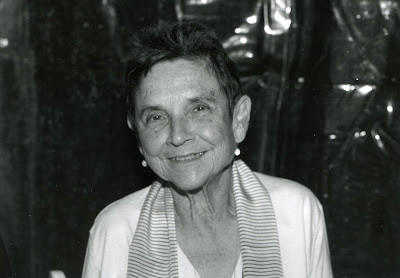 She was probably the most honest person I ever enjoyed some tiny acquaintance with. That's the same as saying that for me she embodied courage.

The New York Times obituary by Margalit Fox does some justice to a woman both poet and prophet.

Art, Ms. Rich added, “means nothing if it simply decorates the dinner table of power which holds it hostage.”

Of Rich's poems, I always come back to this:

II
Everything we write
will be used against us
or against those we love.
These are the terms,
take them or leave them.
Poetry never stood a chance
of standing outside history.
One line typed twenty years ago
can be blazed on a wall in spraypaint
glorify art as detachment
or torture of those we
did not love but also
did not want to kill

Your Native Land, Your Life. 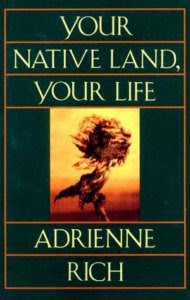 What she and her sisters-in-arms were fighting to achieve, she said, was simply this: “the creation of a society without domination.”

Posted by janinsanfran at 5:53 PM

Email ThisBlogThis!Share to TwitterShare to FacebookShare to Pinterest
Labels: gone but not forgotten, women

It was only a few weeks ago that I checked on Wiki to see if she was still alive and I was so happy to find that she was. So, this is sad news.

I've been a fan of her writing since the mid 80s and own a collected works and a couple of shorter collections by her. I regard her as one of the greatest poets of the second half of the 20th. Century and, as you point out, a prophet for our times.

Absolutely agree. I discovered her in an anthology in a library 'Planetarium': it blew me away! "I am an instrument in the shape/ of a woman trying to translate pulsations/ to images for the relief of the body/ and the reconstruction of the mind." Keep up the good fight, from your sister in England.