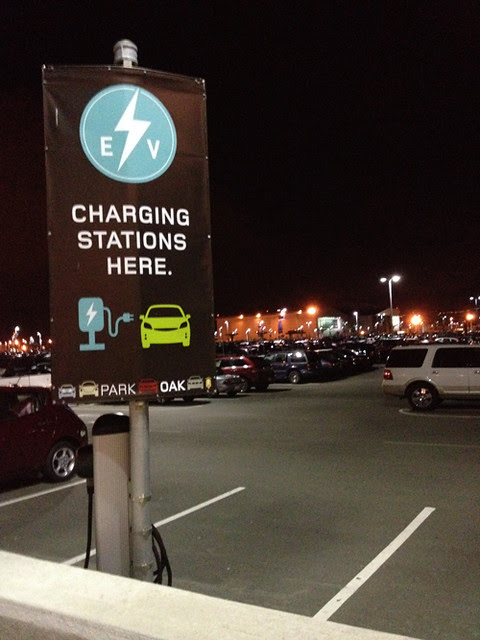 Want a parking place right next to the passenger terminal at Oakland airport? Here you go -- there are lots of empty slots.

You have to bring an electric vehicle to qualify for them. But if your car needs a charge, there are plenty of hook-ups.

Government is creating incentives for folks to adopt electric cars. Does this deserve a cheer? Hard to say -- most likely the electricity running to the charging stations comes from a coal fired plant somewhere. That doesn't make the air much cleaner or reduce carbon emissions much. Now if the electricity came from renewables, wind or solar, that might be more positive,

Meanwhile, why do you park a car (even to charge it) at an airport? Probably in order to fly somewhere on an airplane. Flying, unequivocally, is an activity that loads the skies with the products of burning hydrocarbons. So much for contributing to controlling emissions.

"Have a good flight" -- your car can charge while you travel.

Despite every other legitimate concern, we cannot ignore that our economic and social system is rapidly making the planet less habitable. So I will be posting "Warming Wednesdays" -- unpleasant reminders of an inconvenient truth.
Posted by janinsanfran at 6:48 AM

I think electric cars are still cleaner even if the power ultimately comes from coal, because a unit of power produced at large scale is cleaner than the same unit produced right on the spot. It's one of those cases where centralization is not such a bad thing.
It's true that if we have to produce power on a mass scale, we really ought to do it properly, with solar and wind, and biofuel if someone can figure out how to make that work.