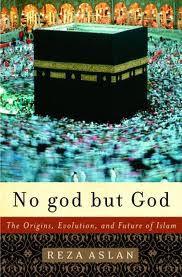 Reza Aslan wants a "Reformation" within Islam; he has said that the world is watching such an upheaval within Muslim societies at this time, though outsiders may not recognize what we are seeing.

His 2005 book No god but God: The Origins, Evolution, and Future of Islam tells the story of Islam carefully, lucidly and with warm affection for his faith's core.

Explaining Islam to western Christians requires historical narrative. After all, for Muslims, God's revelation through the Prophet Muhammed happened in known locales (trading centers on the Arabian Peninsula) at known dates (between 610 and 622 C.E.) and led to material consequences that are fully documented (one of the worlds great empires extending from Spain to the Hindu Kush). The Muslim story makes the tales of that Jewish Galilean carpenter's perambulations around ancient Palestine seem vague, mythological, in the modern pejorative sense.

Aslan is an Iranian-American, a refugee from his native country's harsh theocracy; in this book he is exploring whether his faith can be compatible with the contemporary wider world. He makes a strong case that the history of Islam contains episodes of great openness to diversity, as well as a core commitment in establishing justice and equality among people. But whether Muslim peoples can find their way to Islamic democracies remains hard for him to envision. Here's a sample of this sort of wrestling with possibilities not yet born:

Islam has had a long commitment to religious pluralism. … And despite the ways in which it has been interpreted by militants and fundamentalists who refuse to recognize its historical and cultural context, there are few scriptures in the great religions of the world that can match the reverence with which the Quran speaks of other religious traditions. …[A]cknowledging human rights in Islam is not simply a means of protecting civil liberties, it is a fundamental religious duty.

…the Islamic vision of human rights is neither a prescription for moral relativism, nor does it imply freedom from ethical restraint. Islam's quintessentially communal character necessitates that any human rights policy take into consideration the protection of the community over the autonomy of the individual. And while there may be some circumstances in which Islamic morality may force the rights of the community to prevail over the rights of the individual for instance, with regard to Quranic commandments forbidding drinking or gambling-these and all other ethical issues must constantly be reevaluated so as to conform to the will of the community. …

… any democratic society -- Islamic or otherwise -- dedicated to the principles of pluralism and human rights must dedicate itself to following the unavoidable path toward political secularization. … An Islamic democracy is not intended to be a "theo-democracy," but a democratic system founded upon an Islamic moral framework, devoted to preserving Islamic ideals of pluralism and human rights as they were first introduced in Medina, and open to the inevitable process of political secularization. Islam may eschew secularism, but there is nothing about fundamental Islamic values that opposes the process of political secularization. Only the Prophet had both religious and temporal authority, and the Prophet is no longer among us. …

Those who argue that a state cannot be considered Islamic unless sovereignty rests in the hands to God are in effect arguing that sovereignty should rest in the hands of the clergy. Because religion is, by definition, interpretation, sovereignty in a religious state would belong to those with the power to interpret religion. Yet for this very reason an Islamic democracy cannot be a religious state. Otherwise it would be an oligarchy, not a democracy. From the time of the Prophet to the Rightly Guided Caliphs to the great empires and sultanates of the Muslim world, there has never been a successful attempt to establish a monolithic interpretation of the meaning and significance of Islamic beliefs and practices. …

I've read quite a few accounts of the history and beliefs of the Islamic faith. When Muslims get to hoping for a Reformation -- a struggle within the faith to both preserve and accommodate its core within a contemporary context -- I feel like I'm being a Peeping Tom. This is up the believers, not outsiders. But we live in a world where outsiders can and will see in; a Muslim Reformation, if one is accomplished, will happen in full view of all others. Given this reality, I can heartily recommend Aslan's depiction of Islam to others peering in the global window.

Posted by janinsanfran at 8:03 AM

I read it, too. I thought it a well-written and relevant piece.

Hi Kay -- I think the two of us are rare in insisting that religious beliefs and currents are an important reality within which we (all) live.

I appreciate that you read this stuff when I post it.