Munching on those tablets from Mt. Sinai 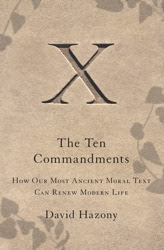 David Hazony's The Ten Commandments: How Our Most Ancient Moral Text Can Renew Modern Life struck me as a mirror image approach to Biblical texts to Bart Ehrman's Misquoting Jesus. Ehrman is all minute explication of the written word; Hazony is about spinning dense meanings out of spare exposition of old rules enunciated in almost unimaginably foreign societies.

I greatly enjoyed this book. I guess I like my apprehension of "the rules" to derive from cheerfully creative moral imagination more than from reverent search for The Answer. Not that I loved or agreed with all or even most of Hazony's conclusions, but I loved his method, his freedom, his wit, and hence was willing to interact with his wisdom.

This is an extremely dense book, a series of arguments, not something that is easily excerpted. To give just a bit of the flavor, he's talking here about ancient Israelite response to their demanding, exclusive, and novel God.

In most of the ancient world, the prevailing belief was that neither gods nor men could change the basic functioning of the universe, that there was a certain primordial reality that everyone needed to adapt himself to. In the Bible we have the opposite. God creates the universe, and he does not stop there. His continued interventions include also catastrophic acts of destruction -- the tower of Babel, Sodom and Gomorrah, Egypt under Pharaoh. God continues to impose his will, and indeed much of the biblical narrative is dedicated to his interventions. Every word he utters, every punishment he metes out, every act of redemption is another act of creation, for he is acting in freedom, imposing his will, changing things. One need think only of the flood, when God, having seen the depth of human corruption, “repented” at having created the world and sought to begin again. He is an inventor, forever tinkering with his imperfect work. God “re-creates the universe each and every day,” says the Talmud.

When we change things, we re-create the universe just as God does. A changed world is a new one, even when the change is small. One of our most important discoveries in early childhood is that the world is not a given, but that we can affect it: A baby pushes buttons on a toy, causing a light to flash and music to play; a toddler builds a tower of blocks; an older child invites her friends over and avoids an afternoon alone; a teenager changes his attitude toward schoolwork and begins getting better grades. All these minor successes give us a rush of the effectiveness of our will -- something especially cherished by children who are so used to having the world and its rules presented to them as unchangeable.

We often forget how easily we may be agents of change. We no longer live in a world where the crucial choices of spouses, careers, and religious commitments are dictated by our parents and communities. Our lives are our own to a degree unimaginable just a few centuries ago, and even as we grow older, we are free to make both major and minor changes in the contours of our lives. Some of these, such as embarking on a new career, marriage and divorce, or religious conversion, entail not only promise but also enormous risk and pain. But as major acts of change, they reaffirm the infinite possibilities of which every one of us is capable. In a sense, every time we exercise our will in recrafting our lives, we imitate God in re-creating the universe.

Our modern, democratic world could never have sprung from a civilization that did not believe in change the way the Bible, and pretty much no one else in the ancient world, did. Modernity, if nothing else, is the unleashing of the individual’s creative will, through political institutions that protect our right to make choices, and through the cultural reverence for the individual as a source of change. …

I don't pretend to know whether what I've just quoted is defensible as history. It might be; it might not. But I do know I am offered something worth chewing on.

Anyone up for a good chew on the Ten Commandments would do well to try this book.
Posted by janinsanfran at 7:00 AM

Odd that the Kindle edition is almost twice the price of the hardcover on Amazon.com

I got it as an audiobook -- and then in hard copy from the public library. I'd be broke without libraries. :-)