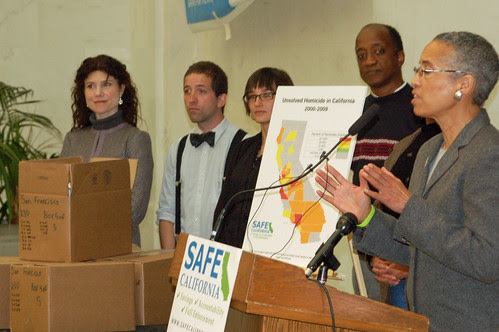 Yesterday the SAFE California campaign submitted some 799,589 voter signatures to place our initiative to replace the death penalty with sentences of life without parole for terrible crimes. Above, retired Superior Court judge LaDoris Cordell speaks while some of the folks who collected petitions for the measure listen in San Francisco. After small armies of workers at the 58 country election departments validate the signatures (we need 504,000 good ones), the measure will be certified for the November ballot.

"California voters are ready to replace the death penalty with life in prison with no chance of parole," declared Jeanne Woodford, who oversaw four executions as warden of San Quentin State Prison.

The idea that Californians "are ready" evoked some skepticism from the assembled reporters. Our state likes to present an image of historic wild west swagger; sure we'll string up the bad guys and achieve rough and ready justice.

But the media hasn't been out on the street gathering these signatures, an experience that amounts to experiencing a huge sample of public opinion. Voters readily understand that there is something wrong; along with the state's quite conservative Chief Justice, they know the execution system is "not working," "ineffective." They are ready to listen to the established facts about the insane costs: California has spent over $4 billion on the death penalty since we enacted it in 1978 -- and executed only 13 people. People want safe communities, not legal theater that fails to solve rapes and murders or to help their kids make it off the streets. And they worry when they hear stories like that of Angeleno Franky Carillo who spent two decades in prison for a murder he didn't commit. We don't want to get this wrong!

One of the pleasures of the signature gathering has been working with grassroots Catholics and with the California Catholic Conference. Rather than trying to dictate morals to an unwillingly and largely indifferent broader population, on this issue, the princes of the church have sought to draw their adherents into the democratic process. Their message of congratulations to the campaign tells that story:

"We were pleased to have participated in this effort by encouraging our parishioners to collect signatures and are gratified that we could join the many other individuals and groups who helped the sponsors of this initiative. We would like to personally thank all the Catholic volunteers who stepped forward and worked hard on the effort.

"Now, in November, California's voters will be offered the chance to make this prudent, life-affirming, safety-enhancing and cost-savings change in sentencing law. Moreover, passing this initiative will prevent the execution an innocent person.

"We look forward to the SAFE California campaign as a time when the voting public can learn of the wisdom of replacing the sentence of death with the sentence of life imprisonment."

It takes a big and broad team to pass a California initiative. The success this phase of the initiative process shows that SAFE California has assembled one!
Posted by janinsanfran at 7:22 AM

Congratulations on your work and your activism. Good luck with getting out the full story. Oregon has gone back and forth on this. The big problem has been that a life sentence didn't mean it and after a particularly brutal murder by someone who had done a brutal murder before and ended up out to do it again, it was again voted in by the people. The key is making that life sentence have no way out-- short of the person being prove to actually be innocent (one big advantage of no death penalty)