On the freedom to ditch college

The change to Daylight Saving Time has disoriented me enough that I have no time for blogging today. But I did want to share a chart I ran across in a Thomas Edsall NYT blog post about how access to higher education has become a factor reinforcing privilege in contrast to the decades after World War II when college acted as a ladder for millions. 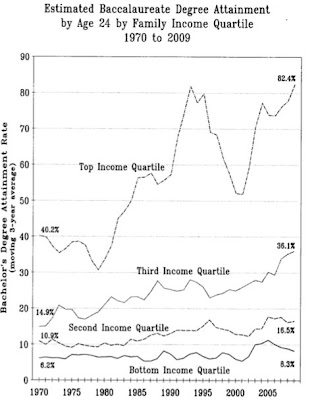 What fascinates me about this is the wild gyrations in the college completion rate among the top quartile of incomes. For everyone else, college completion is either a relatively flat line or slants gradually upward. But privileged young people apparently cut back their college graduation rate in the 70s and again at the end of the 90s and into the early years of the 00s.

I have no data that tells me why this happened. I do think we can assume that top quartile students are the social group that feels the most free to follow their inclinations; they can pretty much trust that even if they wander off the beaten track, they can get back on a ladder toward a good life.

The 70s were a decade in which society was assimilating the racial and gender freedoms partially won in the 60s, as well as disillusionment with institutions that had enabled an evil war and with nuclear families that broke up in record numbers. Can freedom to explore these changes explain the drop off in degree attainment? I did know the child of a university president who adopted the harsh life of a blueberry farmer -- temporarily, I assume.

The late 90s and early 00s seems to have coincided with an even greater relative temporary drop in college completion among the privileged. I'm tempted to suggest that they looked at the ascendency of the moronic George W. and shrugged: with rich parents, who needs school? But that is just snark.

Any better ideas?
Posted by janinsanfran at 10:45 AM