While toting yet another mail bucket of petitions seeking a vote on the death penalty through San Francisco's Financial District the other day, I noticed a plaque I'd somehow missed on previous trips: 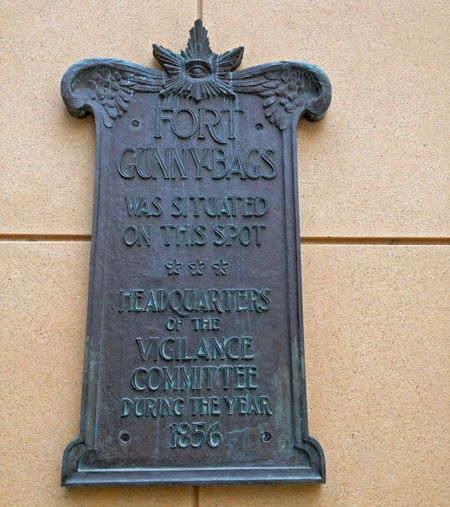 These days, when downtown is a granite wind tunnel that empties out when the commuters go home at night, it is hard to visualize the area as the vibrant center of civic life. But that is exactly what it once was, when San Francisco was a bumptious frontier port in the midst of the gold rush.

Not all the money floating about was in gold nuggets. Urban crooks made out like -- well -- bandits. According to the Virtual Museum of the City of San Francisco:

Politics and the government of the city and State were neglected by the residents, and naturally the offices and emoluments fell to the criminal elements who came west. Some of the worst characters driven from New York's Bowery and from Botany Bay, Australia, held office and wallowed in corruption and graft.

Trials in the courts were a farce, and those in power made no pretense of shielding their friends when charged with crimes.

An honest man's vote was worthless at the polls, and ballot box stuffing was openly practiced.

James King-of-William (that really was his surname) launched a newspaper in protest. When the gambler Charles Cora killed a U.S. marshall, King denounced him. Then a corrupt politician, James P. Casey, shot and fatally injured King.

The reforming Committee of Vigilance, made up of prominent citizens, vowed to defend life, liberty and property by punishing Cora and Casey. They holed up in a warehouse building on the present Sacramento street that became know as Fort Gunny-Bags because of the cloth sacks filled with sand which they stacked around their redoubt. 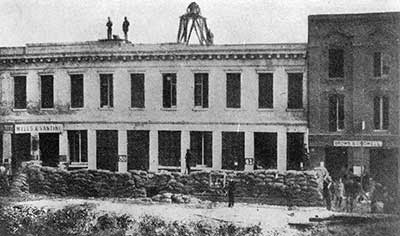 They seized Casey and Cora from the sheriff, gave the men a public "trial" and, on May 22 1856, publicly hanged them in front of their fort. The crowd watching the double hanging was called "immense." 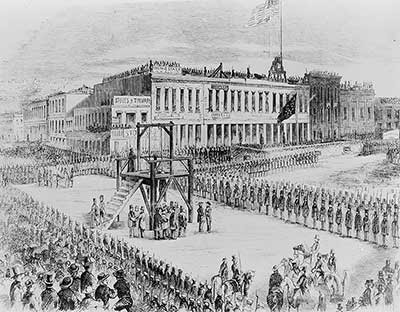 So apparently I'm working to end the death penalty around the corner from the site of one of early San Francisco's most notorious hangings.

The old pictures come from NoeHill in San Francisco.