The Bible viewed through an inverted telescope 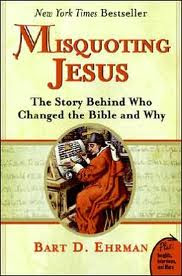 Reading Misquoting Jesus: The Story Behind Who Changed the Bible and Why by Bart D. Ehrman felt to me like trying to see an object looking through the wrong end of a telescope. Ehrman is a textual critic of the New Testament, a professor of Religious Studies at UNC-Chapel Hill. He began his scholarly odyssey at the fundamentalist Moody Bible Institute, moved on to evangelical Wheaton College, and shed any remnant of belief in an inerrant, unquestionable scripture at Princeton Theological Seminary.

Perhaps because of his own intellectual trajectory, Ehrman writes with a view to showing that changes entered the Biblical text as soon as any particular manuscript was manually copied, were magnified by improvements and amplifications that supported the theological directions of dominant interpretations of the Christian faith, and became further muddled as the Greek original language became more distant from later readers in European vernacular languages. Only when he has worked his way up from the sort of minuscule (though perhaps important) textual changes that came misreadings of individual letters through technical changes in copying methods and in languages does he mention where my thoughts about Biblical textual interpolations would start: with the convenient way that what became the canon ratified existing power arrangements, including the principle of obedience to authority and the exclusion of women from influence within faith communities.

This author is clearly an accomplished scholar yet there are elements to this exposition that seem simply odd. For example, Ehrman writes as if we should assume that there lived a real (individual) Mark, Matthew, Luke and John who wrote full, original books of the Bible that later suffered distortion. He can't really mean that given what he explains about the evolution of the texts. But he writes as if the convenient authorial names referred to individuals whose historical reality was far more established than I imagine we have any reason to assume. Further, nowhere in his considerable discussion of the meanings of texts does he suggest that whoever these authors were, they probably were more concerned to share metaphorical truths than the sort of scientifically verifiable truths that moderns look for. There seems no reason to assume that first century C.E. understandings of "reality" were the same as ours. I'm not saying these ancient authors were ignorant or liars -- just that they had different intellectual furniture than we have.

These criticisms should not suggest that I got nothing from Ehrman's book. In fact, it was interesting to learn a little about the general principles that textual critics use to weigh ancient texts. And it was fun to learn that the classical scholar and theologian Richard Bentley (1662-1742) engaged in a style of academic polemic that exuded quite remarkable venom when he disagreed with another student of the Bible. Ehrman expresses my sentiments exactly here:

Such controversial pamphlets are a marvel to behold in our own day of subtle polemics; there was nothing subtle about personal grievance in those days. Bentley remarks that "We need go no further than this paragraph for a specimen of the greatest malice and impudence, that any scribbler out of the dark committed to paper." And throughout his reply he provides a smattering of rather graphic terms of abuse, calling Colbatch … a cabbage-head, insect, worm, maggot, vermin, gnawing rat, snarling dog, ignorant thief, and mountebank. Ah, those were the days.

Though I rapidly concluded Ehrman's book was not for me, I have no doubt that it might be eye opening to a person approaching the Bible through the other end of the telescope, a person breaking free from the effort to believe that the text was the wholly true, directly revealed, inspired word of God. It takes all kinds …
Posted by janinsanfran at 6:00 AM

Interesting. I'm always amazed at a lot of the interpretations of the Bible.