Every morning my partner gets up and complains: "Every tree in the city is trying to have sex in my nasal passages." Not fun, all this seasonal exuberance among the plants.

Apparently for those of us who respond unhappily to spring pollens, climate change is going to make the season more uncomfortable.

USDA scientist Lewis Ziska, among other researchers, has found that ragweed is one of the plants whose growth is most enhanced by exposure to higher concentrations of carbon dioxide. Not only does the ragweed grow faster when exposed to more CO2, it also produces more pollen. This is especially an issue in cities, which have higher concentrations of CO2 than rural areas, thanks to having a higher concentration of cars and other CO2 emitting sources. Extra bonus: There's also some evidence that allergy seasons are getting longer, as Spring starts earlier and Winter takes longer to truly set in. 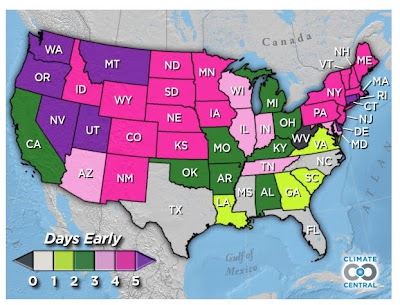 Climate Central discusses the earlier arrival of spring, regional differences, and how warming trends might project into the future.