Health insurance reform is before the Supreme Court … 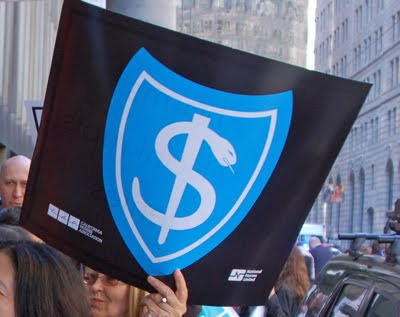 and most of us still barely know what Obamacare does. In the interests of clarifying some of the fog of partisan war, here's a part of one the government briefs (via Balloon Juice.) This description is really quite readable, despite having been written by lawyers.

First, Congress made health insurance available to millions more low-income individuals by expanding eligibility for Medicaid. Beginning in 2014, Medicaid eligibility will extend to anyone under age 65 with income up to 133% of the federal poverty level. Currently, Medicaid beneficiaries are primarily children in low-income families, their parents, low-income pregnant women, and low-income elderly or disabled individuals. The newly eligible persons will consist primarily of low-income non-elderly adults without dependent children.

Third, Congress provided for creation of health insurance exchanges to enable individuals and small businesses to leverage their collective buying power and maintain health insurance at rates competitive with those charged for typical large employer plans.

Fourth, Congress enacted market reforms that will make affordable insurance available to millions who cannot now obtain it. Certain reforms have already taken effect, including provisions that bar insurers from canceling insurance absent fraud or intentional misrepresentation and from placing lifetime caps on benefits, 42 In addition, the Act establishes medical loss ratios for insurers, i.e., minimum percentages of premium revenues that insurers must spend on clinical services and activities that improve health care quality, as opposed to administrative costs or profits. The Act also requires insurers providing family coverage to continue covering adult children until age 26, which has led to an additional 2.5 million young adults gaining coverage. Beginning in 2014, the Act will bar insurers from denying coverage to any person because of medical condition or history, (guaranteed-issue provision), and from charging higher premiums because of a person’s medical condition or history, (community-rating provision).

Fifth, Congress enacted new tax credits, cost-sharing reduction payments, and tax penalties as incentives for individuals to maintain a minimum level of health insurance. The Act establishes federal premium tax credits to assist eligible individuals with household income up to 400% of the federal poverty level purchase insurance through the new exchanges. These premium tax credits, which are advanceable and fully refundable such that individuals with little or no income tax liability can still benefit, are designed to make health insurance affordable by reducing a taxpayer’s net cost of insurance. The credits will be available even to families with incomes at (and above) the median level, which, in 2010, was $75,148 for a family of four and $42,863 for an individual. For eligible individuals with income up to 250% of the federal poverty level, the Act also authorizes federal payments to insurers to help cover those individuals’ cost-sharing expenses (such as co-payments or deductibles) for insurance obtained through an exchange. CBO projected that 83% of people who buy non-group insurance policies through exchanges will receive premium tax credits, (20 million of 24 million), and that those credits, on average, will cover nearly two-thirds of the premium,

In addition to those incentives through tax and other subsidies to purchase health insurance, Congress assigned adverse tax consequences to the alternative of attempted self-insuring. Congress provided that, beginning in 2014, non-exempted federal income taxpayers who fail to maintain a minimum level of health insurance coverage for themselves or their dependents will owe a tax penalty for each month in the tax year during which minimum coverage is not maintained.

Emphasis added for readability. There, that wasn't so bad, was it?
***
Whenever I think about Obamacare, I find myself wondering what inspires such violent resistance to what seems a simple moral imperative. I understand objecting that we've been gifted with a poorly designed Rube-Goldberg apparatus that still serves the interests of insurance companies as much as of patients. I don't understand the willingness to just let people die if they haven't found a way to get insurance from a profiteering system. We have at least 49 million people with no health insurance either because they lack the cash to pay for it or insurers refuse to cover them because they've been sick. But some Tea Party people cheer at the thought of person who makes the mistake of not having insurance being left to die. Somehow those who suffer don't qualify as real people, real neighbors, to those who cheer. I don't get it. Mere prudence -- self interest -- would seem to argue for wanting to find a way to extend care to everyone.

Once we finally win some kind of medical care for all, I doubt very much that there will be hardly any who don't avail themselves of it. Most of us know a good thing when we enocounter it.
Posted by janinsanfran at 5:30 AM

I suspect the people who appear willing to let anyone who cannot afford private health coverage die are the same kind as this man in this story in the NYT today who refuses to participate in the Massachusetts health care system even though he can afford it because he is healthy.

Which, of course, means - since he will be treated when he does get sick sometime in the future - that everyone else in Massachusetts pays for his care.