Nine years on: the human residue in Syria of the U.S. war on Iraq 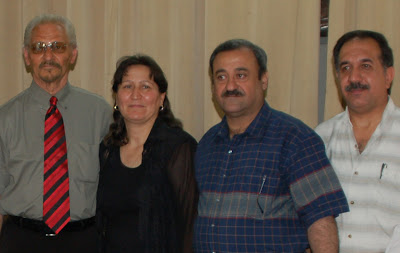 Where are they now? Iraqi refugees we met in Damascus in 2006.

Nine years ago on March 20 the forces of the United States began their assault on Iraq. It's pretty universally agree that this "war of choice" -- an aggression grounded in lies -- was a catastrophe for attackers and Iraqis alike.

One of the war's major consequences, in addition to directly killing between 100,000 and 1,000,000 Iraqis, was to drive several million Iraqis from their homes. Somewhere between 10 and 20 percent of the population found themselves involuntarily on the move, whether because of direct attacks from the occupying army or the sectarian civil war the U.S. invasion unleashed.

The only neighboring country that willingly took in large numbers of these displaced and dispossessed Iraqis was Syria, now in the midst of its own civil struggle. Are these Iraqi casualties of war once again going suffer for being in the wrong place at the wrong time while the fighting rages? Perhaps. A new government maintains a dubious peace in Iraq, but going home remains dicey. The UNHCR -- the UN Refugee Agency -- estimates there remain about one million of these people in Syria. Here's how they describe things in classic bureaucratese:

Beyond the general protection concerns resulting from the current unrest in Syria, its social and economic impact on people of concern is likely to require UNHCR to provide them with significant direct assistance in the near future. Moreover, the current situation in the Syrian Arab Republic is likely to cause serious delays in the resettlement programme, jeopardizing refugees' access to this durable solution.

With refugees exhausting their personal resources and international assistance for public health and education programmes on the decline, new vulnerabilities could arise even among those who used to be able to provide for themselves.

Al-Akhbar English paints a more vivid picture of what the Syrian unrest means to the marooned Iraqis.

In 2008, Iraqi activist and journalist Hana Ibrahim fled from her home in Baghdad to Damascus, taking her two children with her. They had grown up under sanctions and war, and had as such never enjoyed the level of security they found in Syria. But even that has become a thing of the past.

“For years my daughter couldn’t go out alone, because the streets had become too dangerous for girls especially. In Damascus, she felt free to do as she pleased,” said Ibrahim. “In Iraq, we had grown used to electricity cuts. Once in Syria, my children were surprised we had power round the clock. In general, life was much better for us here.”

But one year on from the start of the uprising, life in Syria has changed dramatically for Syrians and non-Syrians living there. Many face a worsening security situation, disruptions to social services, increased impoverishment, and uncertainty in the face of the future.

It is not (so far) that either the Syrian authorities or insurgents are actively targeting Iraqis, but Syria's economic paralysis threatens their continued ability to make a living. As immigrants without legal status, they have never been able to work officially, but got by on the proceeds of informal commerce.

Today, a deteriorating Syrian economy and security situation have meant that “many of the Iraqis’ small businesses have either already closed down, or are about to be forced shut. Though many of the refugees have a high level of education, they have no other means of survival,” said [Souad] al-Azzawi, [an Iraqi environmental engineer, human rights activist, and herself a refugee.] “How will they pay their rent? How will they pay their bills? How can they survive this disaster? I don’t know.”

Al Azzawi is particularly concerned about the young people.

“These children have the additional burden of suffering for the second time in recent memory,” she said, pointing out the psychological toll of displacement, which is often especially traumatic for the young. “They left as a result of the American invasion of Iraq, and have already had to deal with rebuilding their lives once. While in Iraq, some of them had lost friends, others had lost family members. Now, they have to face uncertainty once again. …”

Iraqis who have officially declared their refugee status to the UNHCR have hoped to resettle somewhere with more opportunity than Iraq in its trashed condition or an uncertain Syria. Since 2007, 28,000 of them have moved on to other countries, mostly to the U.S. and Canada. But that's just a trickle from among the millions of lives torn apart by the war President George W. launched so blithely nine years ago.

And, as Al Ahkbar points out, now that the U.S. embassy in Damascus has been closed down, even that trickle has ceased to provide an exit for Syria's unbidden Iraqi guests.
Posted by janinsanfran at 5:30 AM