To understand the past ... 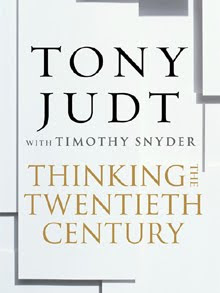 This blog often includes items discussing books of history. For example, last year I focused heavily on accounts of aspects of World War I. I hold decided opinions about what is good historical writing and what is not.

In this context I was fascinated by discussions about the profession of history between the late Tony Judt and Timothy Snyder in Thinking the Twentieth Century. I consider Judt one of the few historians I've ever read whose work significantly re-ordered my thinking. (My discussion of his monumental Postwar is here.)

Judt is dismissive of most members of his own scholarly discipline. I imagine his colleagues found him a difficult guy to appreciate, but for this reader, it not hard to sympathize with his strictures.

If you asked my colleagues: what is the purpose of history, or what is the nature of history, or what is history about, you would get a pretty blank stare. The difference between good historians and bad historians is that the good ones can manage without an answer to such questions, and the bad ones cannot. But even if they had answers, they'd still be bad historians -- they would simply have a framework within which they could operate. Instead of which they have little templates -- race, class, ethnicity, gender and so on -- or else a residually neo-Marxist account of exploitation. But I see no common methodological framework for the profession.

That is, he thinks most of his colleagues are in thrall to various identity concerns or to an intellectual framework that has outlived whatever usefulness it once had. And so their efforts neglect what he considers the fundamental object of history: "to understand the past."

Furthermore, though students may be exposed to "history" in high schools and colleges, what they are too often getting fails to meet their need to integrate an orderly sense of where we come from with their perceptions of where we are. Contemporary history teachers have too often prioritized equipping students to look for what historical accounts neglect or how they implicitly argue with each other rather than getting down to the prosaic but necessary business of passing on largely agreed accounts of what happened. This has been profoundly destructive of the capacity of young people so educated to engage with the questions that rend their current societies.

…Before anyone -- whether child or graduate student -- can engage the past, they have to know what happened, in what order and with what outcome. Instead, we have raised two generations of citizens completely bereft of common references. As a result, they can contribute little to the governance of their society. The task of the historian, if you wish to think of it this way, is to supply the dimension of knowledge and narrative without which we cannot be a civic whole. If we have a civic responsibility as historians, this is it.

Snyder, also a distinguished historian, amplifies Judt's critique. If history is as malleable a commodity as much current teaching asserts, students become unable to judge what is is real and what matters.

I think that a lot of apparently critical history is actually authoritarian. That is, if you're going to master a population, you have to master its past. But if the population has already been educated -- or induced -- to believe that the past is nothing but a political plaything, then the question of whether the play-master is their professor or their president becomes secondary. If everyone's a critic, everyone seems free; but in fact everyone is in thrall to whoever best manipulates, with no possibility of resort to fact or truth as self-defense. If everyone's a critic, everyone's a slave.

History's fundamental ethical responsibility is reminding people that things actually happened, deeds and suffering were real, people lived thusly and their lives ended in such and not other ways. And whether those people were in Alabama in the 1950s or Poland in the 1940s, the underlying moral reality of those experiences is of the same quality as our experiences, or is at least intelligible to us, and therefore real in some irreducible way.

Both Judt and Snyder adhere to a standard for judging whether something is "good history" that must be infuriating to their detractors; as Supreme Court Justice Potter Stewart memorably declared about pornography, they claim to "know it when [they] see it." Says Judt:

… there has to be a plausibility in your story. A history book -- assuming its facts are correct -- stands or falls by the conviction with which it tells its story. If it rings true, to an intelligent, informed reader, then it is a good history book. If it rings false, then it's not good history, even if it's well written by a great historian on the basis of sound scholarship. … My younger colleagues find this a completely mystifying proposition: for them, it's good history if they agree with it.

I loved this stout declaration; it is exactly how I judge the many works I read, though I certainly can't claim these two gentlemen's erudition. I have some academic historical training and am widely read, but ultimately, I judge written history in this partially subjective manner. Simply put, I judge most of the books I read and write about within three categories: All of these have something to offer, but their limits need to be understood. Judt and Snyder contend that the academy has failed to educate us to be informed consumers of history and that the results are bad for civil society. I believe them.
Posted by janinsanfran at 5:30 AM