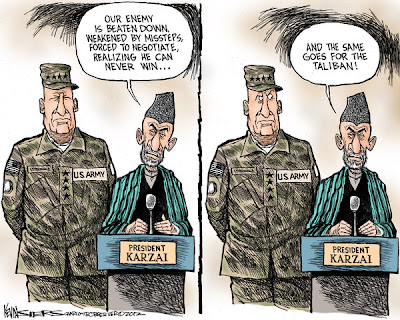 One morning's tales from Afghanistan:

An Afghan soldier shot to death a 22-year-old Marine at an outpost in southwestern Afghanistan last month in a previously undisclosed case of apparent Afghan treachery that marked at least the seventh killing of an American military member by his supposed ally in the past six weeks, Marine officials said.

The American staff sergeant suspected of killing 16 Afghan villagers had been drinking alcohol — a violation of military rules in combat zones — and suffering from the stress related to his fourth combat tour and tensions with his wife about the deployments on the night of the massacre, a senior American official said Thursday.

KABUL, Afghanistan — A Turkish helicopter crashed into a house in Kabul on Friday, killing at least 12 NATO service members and two civilians, the American-led coalition and Afghan police said.

Women visiting relatives at a notorious men’s prison on the edge of Kabul have in recent weeks been subjected to invasive body-cavity searches at the order of the prison’s commandant, who has told guards and American officials that the measure is needed to keep out contraband, Western and Afghan officials said.

…Having been repeatedly rebuffed, the Americans on Thursday tried to use the best lever they have: they cut off all American financing to Pul-e-Charki until they can confirm that the invasive searches have stopped, two Western officials said. The United States has spent about $14.2 million on improvements at the prison since June 2009.

Enough.
Posted by janinsanfran at 7:32 AM